Cua are a Laois based band with members John Davidson, Shane Booth and Ros O'Meara. They like to call themselves Atlantean by which they mean, "a kind of folk and roots style, encompassing our Celtic heritage and the influences of ancient music on later genres such as Jazz, Bluegrass, Appalachian, Americana, and a touch of psychedelic folk thrown in for good measure.” John Davidson has been involved with Global Trad Underground and spent some time in Nashville as a session musician playing and touring with bands such as The Mavericks, Abel Kane, Footloose, The Fields, Chad Wilson, The Space Cowboys. Shane Booth plays guitar and provides vocals. His previous and current musical groups include his folk-rock group Ceolaire, Global Trad Underground, Rhiannon & The Face Collectors, Judith Mok and her Hamsa Ensemble, Shanakua, Rain Dogs. They have just released a new EP which we include below.

“We describe our work as being, for the most part, folk and world influenced.” says Shane. “We are a group of multi-instrumentalists and vocalists who have trained in, and are inspired by, many aspects of the musical spectrum from jazz to classical, traditional to music therapy, bluegrass to a capella and the list goes on. We truly pride ourselves on our diversity and this is clearly evident from our live shows which also have subtle nods to many genres, whilst keeping a folk, world, roots and traditional through line as well as a strong emphasis on vocals.”

All three have played together since childhood with their paths crossing many times over the last decade, collaborating and writing under different guises. A mutual love of folk and acoustic music brought them together. A chance encounter with a promoter led to a couple of support shows for Andy Irvine as a 3-piece.

As an example of their world influences The Gimp and the Anvil which appears on the EP came about after a meeting they had with a few Turkish musicians. This led to them embracing their musical culture and integrating it into their own music.

“We learned what Turkish kids learn when they first start studying music, which is to play in a 10 count metre as opposed to 4. This is how The Gimp & The Anvil came about, and came to be on the EP. It seemed like a fitting contrast to the other folk songs. In fact, if you listen to Track 3, called ‘No, we begin to start moving away from a standard folk metre at this point, and to a more world based rhythm. After all, The Gimp & The Anvil is only one more beat than a slip jig and who's to say it won't be played alongside The Fox Hunters at a session in twenty years time.”

They talk about the difficulties of surviving as a band on the ever evolving music scene in Ireland.  Shane said : “We all know when we get into the music game that it is a long, hard road. Everyone gets told this at some point along the way, but just how long and hard is that road? We've read many recent articles highlighting the struggles of Irish artists in the economic downturn. Is it possible to make enough money through sales and live shows to keep the wolves from the door?” 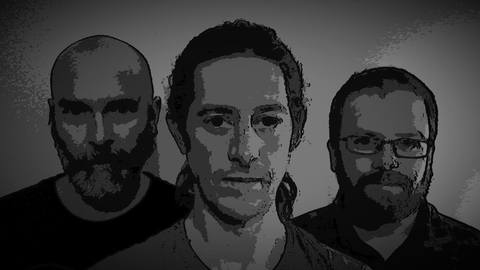 “On the plus side, there is a lot that can be done today with reasonable rates in the recording and production stages of an EP or album, for example. But once that product is in your hands where do the independent and unsigned acts turn to? More and more platforms are showing up for artists all the time with ever increasing amounts of festivals popping up everywhere, and fantastic radio presenters with interesting and vibrant music shows nightly! So there is no reason a group should not be able to get their name out there, but where do the returns come for the group.”

“Online digital distribution has turned out to be quite farcical from a streaming point of view with literally millions of streams required to earn a few bob! More and more artists are removing their material from these online streaming vehicles and it seems like the focus for the artist should be in their live shows and selling their music directly.”

“As cua, we have found we have really had to do things for ourselves in terms of finding the right places to perform and showcase. Putting on our own shows in venues and locations which suits our style allows us to have an influence on how the music is heard. We can't control how anyone hears music, but we endeavour to provide a space to allow the audience hear and feel the music as we do. Where the setting is better, the sound is better, the band will perform better, the audience will enjoy themselves more and this translates to more sales.”

“Financial Sustainability? .... it can seem slightly out of reach but for now cua are going to try make the long, hard road as fun and as self-created as possible and it's sharing the creative experience which keeps it all going when it's pitch black, there's freezing fog and it's a long drive home.”

Visit their Facebook and Reverbnation pages for more information.