From Ballinasloe to B 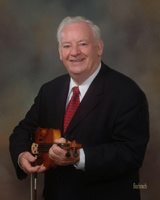 oston, Larry Reynolds  was one of the most influential fiddle players of his time, not only for his East Galway style of playing but also because of the contribution he made to Irish Culture in Boston and throughout North America.

He emigrated to Boston in 1953 from Ahascragh, Ballinasloe and quickly became immersed in the lively Irish Music scene in Roxbury.  He was a founding member of the Boston branch of Comhaltas Ceoltoirí Éireann which has become one of the most active branches in the country.

In 1954 he married Phyllis, an accomplished piano player.  They imparted their love of Irish Music and Culture to their six sons and one daughter as well as the countless visiting musicians, singers and dancers who visited their home in Waltham throughout their marriage of 58 years.

Larry plied his craft, both as a master carpenter by day and as a musician by night and in doing so, in his own quite and resolute way, he has led the way for successive generations of traditional Irish musicians.

The Larry Reynolds Irish Music Festival is the second such festival and serves as a commemoration and celebration of Larry's life and all he gave to Irish Traditional Music.  We hope that you may be able to join us during the weekend of 11th-13th September.