Tom Morley has channelled a lot of experience and effort into a new fiddle tutor called Learn to Play Irish Trad Fiddle.  Despite the proliferation of free tune setting online, you still can’t beat having a book that you know comes with a quality stamp on it.  That quality stamp means that significant effort has gone into the tunes within.  Even today I still reach for a book rather than my laptop when searching for a tune. What you get on Learn To Play Irish Trad Fiddle is a selection of 50 Irish Jigs, Reels, Polkas, Waltzes and more, all set out in basic terms, concentrating on the beauty of the melody rather than overcomplicated ornamentation.  For this reason it is aimed at intermediate level players.  The tunes in the book are presented in a sequential manner in order of difficulty and include standard tunes that you will encounter in nearly every Irish session.

As you progress he introduces some authentic slurring patterns, rhythms, and simpler ornamentation. The accompanying CD includes every tune in the book, played on fiddle.  As a bonus, some tunes are played through twice and some have gentle accompaniment from guitar, harp, and bodhrán.  It is a well written and presented tutor, ideal for anyone starting out and wishing to enhance their repertoire.  The only criticism that I would have of this, and most tutors is the fact that the CD only plays most tunes through once.  It would be preferable if tutor CDs played the tunes once at a slow pace and then twice through at a moderate pace, giving you time to get into the tune and play along.  Having said that the tunes are expertly and clearly played which really aids learning. Once you have the basic tune you can progress to adding in a little ornamentation and variation.  All in all this is a fine, informative and well-presented tutor that would benefit anyone who is starting out playing the fiddle. Visit www.irishtradfiddle.com 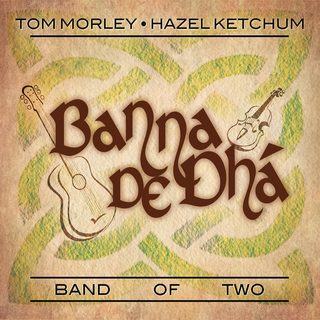 For those that may want to hear more of Tom Morley he has also just released a duet album with guitarist Hazel Ketchum called Banna De Dhá / Band of Two.  It has been picking up lots of positive reviews in the states.  Within the 9 tracks he includes some well-known Clare sets such as Willie Coleman’s Jig/The Mooncoin/The Carraroe and Paddy Ryan’s Dream/Paddy Fahey’s No.1/The Shetland Fiddler.  The well-travelled Martin Rochford’s/The Green Gowned Lass set gets a leisurely outing in Tom’s strong and measured style, slowly building up to its more recognised tempo.  It featured on Martin Hayes’s Live in Seattle and debut album and you can see that Tom takes inspiration from one of Clare’s finest.  Also included is the glorious Junior Crehan composition Caisleán an Óir which gets an extended reworking, as he turns and twists it for close to 5 minutes.  With two vocal tracks that include an impressive The Water is Wide by Hazel Ketchum you get an album of forward looking traditional music that seeks to reimagine some well known standards.  It’s a strong outing from a musician that has given a lot to the tradition over the years and would make a fine companion CD to his impressive tutor book.