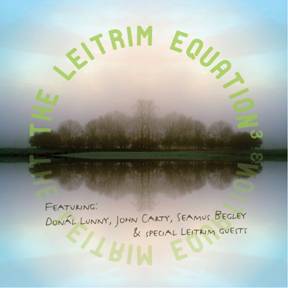 On Sunday 27th October, over twenty of Ireland’s finest traditional musicians are coming together for a special concert and launch of ‘The Leitrim Equation 3 CD’. The concert, which is supported by Waterways Ireland, is part of the 15th Return to Camden Town festival in the London Irish Centre and is the culmination of a residency by leading traditional musicians Dónal Lunny, John Carty and Séamus Begley who have been resident in the county of Leitrim over the last eighteen months.

In 2006, Leitrim County Council Arts Office with the support of the Arts Council of Ireland devised a programme called ‘The Leitrim Equation’ where Ireland’s most respected and talented traditional music groups were invited to spend time in the county working with musicians and groups culminating in the recording of a CD. This process would celebrate music in Leitrim and of Leitrim. It would contribute to the professional development of musicians, and it would act as a focal point for the development of music in Leitrim generally.

The first two residencies were led by traditional music supergroups Lúnasa and Dervish. For this third residency, a group of individual musicians who are each legends in the world of traditional music were brought together in Leitrim - Dónal Lunny on bouzouki and guitar, Séamus Begley on accordion and vocals, John Carty on fiddle, banjo and tenor guitar along with special guest, Leitrim native and 2012 TG4 Musician of the year, Brian Rooney.

The group relished coming together in Leitrim because of the richness of the music there, and the opportunity to play with musicians from Leitrim they regard as ‘greats’ in Irish music. They came for the welcome and camaraderie that County Leitrim is known for which they enjoyed the length and breadth of the county, and they came with a genuine desire to share the skills and experience they have gathered over their careers with the next generation of Leitrim musicians. The residency draws to a close this October with the launch of a CD recorded by the group along with a whole host of Leitrim musicians. Entitled ‘The Leitrim Equation 3’, the CD consists of a selection of tunes by composers from, or connected with County Leitrim from as far back as O’Carolan, to Joe Liddy, to present day masters such as Charlie and Maurice Lennon as well as newly composed tunes by the group and other local musicians. The CD features some familiar Leitrim tunes as well as lesser known ones which were uncovered during the residency, and they are all performed by the group and some of the Leitrim musicians they met and worked with during their time in the county.

The launch of ‘The Leitrim Equation 3’ will be celebrated with a Gala Concert hosted by the Return to Camden Town Festival at the London Irish Centre on Sunday 27th October in what promises to be a fantastic night of music. There are a number of special connections to London which make this particularly fitting. Special guest, Leitrim fiddle player Brian Rooney has spent most of his life in London. In recent years he has come to wide acclaim, most notably in 2012 when he received traditional music’s highest accolade, the TG4 Musician of the Year Award. John Carty, a previous recipient of the same award, migrated in the opposite direction, born in London and now firmly ensconced in the northwest of Ireland. Niall Keegan, director of the MA in Traditional Music Performance at Limerick’s Irish World Academy of Music and Dance is another London native whose family hail from Leitrim. Given the immense bank of expertise in professional development garnered at the academy, Niall provided invaluable help to shape the residency in its early days. Séamus Begley brings to three the members of the group to have received a TG4 award, being this year’s TG4 Singer of the Year. He brings his extraordinary talent on the accordion and stunning vocals to the project. From Planxty to the Bothy Band, Dónal Lunny is internationally renowned for his groundbreaking contribution to Irish music. In recent years he has become equally regarded as a producer, and with this programme has played a leading role in the development of young musicians as well as producing the Leitrim Equation 3 CD.

Joining the group on the night will be a stunning list of over twenty of Leitrim’s finest musicians, singers and dancers including Eleanor Shanley, Ben Lennon, Michael O’Brien, Edwina Guckian and many more for a night that promises to raise the roof off the London Irish Centre in a celebration of Leitrim Music. This will be a tremendous conclusion to the Leitrim Equation project and is guaranteed to be a very special event promoting the rich tradition of Leitrim music that is undeniably alive and kicking.

Coinciding with the concert, Leitrim Tourism is launching a search for Leitrim Ambassadors in the UK in the London Irish Centre at 6.30pm the same day as the concert. The initiative is targeting people who come from Leitrim and are now living in London, and the UK, encouraging them to become advocates of their native county, encouraging others to look to Leitrim as a destination of culture, hospitality and unspoilt beauty.

The Leitrim Equation concert starts at 8.00pm on Sunday 27th October as part of the 15th Return to Camden Town Festival at the London Irish Centre, 50-52 Camden Square. Tickets are £15 (£13 pre booking) and they can be booked through the festival Box Office by calling 07871 088121. For further information please visit the festival website www.returntocamden.org.