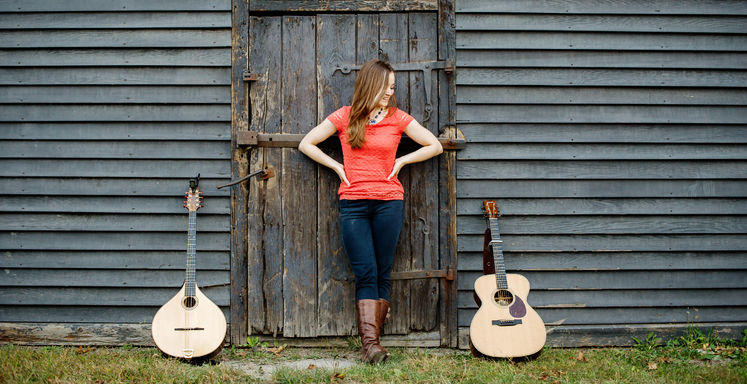 Join Tradconnect in supporting traditional artists across the globe with funding of new traditional albums.  Your support can make a big difference. This month Boston singer Lindsay Straw launches a campaign for her new album called "The Fairest Flower of Womankind". Here is her message.

"Hi there, and thanks for checking out the Kickstarter for my second album! My name is Lindsay Straw, and I'm a guitarist, Irish bouzouki player, singer, and interpreter and arranger of traditional songs. I'm originally from Montana, but I've been a part of the Boston folk and Irish music scenes for nearly a decade. In 2015 I released my first solo album, "My Mind From Love Being Free", which got some great feedback from renowned folk music publications like Sing Out! and fRoots. Jim McCourt at The Living Tradition kindly wrote, "Lindsay's obvious competence and the marvelous versatility of her voice will lead her to tackle a wider range of material in the future. There is much more to come from Lindsay Straw."

Now with your help, I’m ready to release my second solo album!

"The Fairest Flower of Womankind"

Shortly after completing that first album, I became inspired to start collecting traditional songs featuring women in a place of power - perhaps they're saving the day, outsmarting a foe, getting the upper-hand or revenge, or just rejecting tradition. I’d been collecting traditional songs that resonated with me as a woman, and with them I wanted to further develop my own interpretation and arrangement skills. I also wanted to follow in the footsteps of other women musicians who have contributed albums or books of women’s songs to the folk world. Most of the songs come from Great Britain, or at least the versions I focused on were primarily either English or Scottish, though many have variants in Ireland, America, Australia, and elsewhere. The album's title, "The Fairest Flower of Womankind", comes from a line in "Geordie", which not only inspired the whole concept of the album but also remains my favorite song of the collection.

Now, thanks in large part to Club Passim’s generous Iguana Grant, all the recording, mixing and mastering is complete, and I’ve got a nearly-finished album showcasing 12 traditional songs about kickass ladies. Most feature my bouzouki and guitar accompaniment, and about half feature musical contributions from my friends and long-time collaborators Armand Aromin (fiddle, harmony vocals), Ben Gagliardi (concertina, harmonica, harmony vocals), Dan Accardi (fiddle, accordion), and Owen Marshall (guitar, harmonium). Once again I worked with engineer Jim Prendergast at Mill Pond Music Studio in Portsmouth, NH to record, mix and master the project. I also commissioned a beautiful drawing from French artist Amandine Comte for the album cover.

The only thing left to do now is get the album packaged, printed and out into the world!