Ensemble Ériu are currently on tour promoting their second album, Imbas. The tour will finish this week with three dates at  An Lab, An Daingeann on Wednesday 16th November, Belvedere House, Dublin on Thursday 17th, and St. Kevin's Church, Hollywood, Co. Wicklow on Friday 18th.

They state that “Imbas is an Old Irish word for creativity or inspiration, and it captures an aspect of all music, in that music makers are generally inspired by what they hear, and to some extent create new music from their experiences of listening.” They say it is a particularly strong facet of Ensemble Ériu’s music and one reason why we should pay so much attention to the band, saying that “they present a dramatic example of how music works.”

We spoke to Paul O' Connor of Raelach Records about the band and their music and he provided the following detailed insight into their music which we present, unedited below.

“As with the first album, the tracks on this one consist of rich renditions of Irish traditional tunes (on concertina, fiddle and flute) set in and set off by a whole range of other material and strategies – some derived from jazz, some from contemporary classical, some from just turning over fragments of the actual tunes themselves or stylistic quirks picked up from other players. The idea is simply to shine new light on the sometimes overlooked character and beauty of these tunes.

Unlike other approaches to playing traditional tunes, Ensemble Ériu neither just play the tunes with individual style and ornamentation (though that features), nor do they primarily alter the tunes fundamentally to accommodate additional, “alien” material (though at times that is happening, in a way and to a very small extent, during the pieces). Quite uniquely, they play the tunes as they might be played by any quality traditional musicians – (it is particularly evident in this album just how well they deliver the tunes as melodies) and only add to it (with some exceptions) through “alien” instrumentation: the marimba, the clarinet, the double bass, the electric guitar and the drums.

The contemporary light cast on the tunes can – perhaps paradoxically – help the tunes themselves to be "heard" more clearly. They are rejuvenated in a sense by being teased away somewhat from the more rhythmical emphasis often placed on the music by other settings.

In another way, it's like being given a chance to experience what another listener is feeling when they listen to these tunes. It is musical commentary on the tunes, highlighting some aspect of them that might otherwise escape listeners who are swept up by the pulse and never come down to hear what the melody is saying.

Tunes can be light and happy, but they can also be dark and melancholy, and of course everything in between. Ensemble Ériu’s settings say to us, Hey, did you hear that? Wasn’t that interesting/beautiful/clever …? Why don’t we repeat it on a different instrument/slow it down/add a harmony …? And so on.

The album opens with ‘The Tempest’, a well-known reel in the repertoire. This version of the tune owes a debt to the west Clare fiddler, Bobby Casey (1926-2000), one of the great stylists of Irish fiddle music. Ensemble Ériu’s setting involves a pulse set up by the clarinet at the start of the track, picked up by the marimba, filled in by the double bass, guitar and drums, before the tune jumps in on fiddle and concertina. The many variations the concertina and fiddle inject into the melody are matched by a plethora of subtle variation in the surrounding music. Tumbling together, they create something at once stirring and tender.

‘The Yellow Wattle’ is a tune much loved by uilleann pipers. The spirit and style of playing of the great Clare piper, Willie Clancy, very much informs the version heard here. From a riff on the concertina, the first part of the melody bursts forth, hauling the marimba and bass along with it and eventually the floor tom drum. The second part of the tune (considerably longer in duration) is given more humph. After a number of rounds of the tune, the concertina creates a surreal passage with familiar yet somehow strange phrases, coloured lightly by clarinet, guitar and later marimba, before the tune is found again with the help of the fiddle.

There is a gentle tip-toeing of marimba and guitar into the next tune, ‘Cnocán an Teampaill’, the melody played first on flute, then skeletally by bass clarinet before being joined by fiddle – all underscored by chords on concertina. The break is sparse with just marimba, guitar and clarinet. When the flute comes back in with the tune, the clarinet now harmonises loosely and it’s the concertina that blends first with the flute and is soon joined by fiddle. Meanwhile the drums begin a loose dappling around the beats, before concertina and fiddle join the melody. A second break features gentle phrasing of the melody, and the track eventually dreams itself away with concertina chords and marimba fragments.

Track four is unusual for Ensemble Ériu in that for a third of its length it is straight-up trad: concertina, fiddle and flute playing a beautiful version of ‘the Humours of Drinagh’ before going into ‘the Humours of Kilclogher’. The three instruments are thrillingly woven together, the ear at times following one, then the other; with the concertina or fiddle playing the odd chord, the flute jumping register here and there. The flute drops out for Kilclogher, and the concertina and fiddle pick up the slack with more ornamentation and vigour. The change is subtle: a casual phrase on the marimba comes in and then on the double bass; soon the clarinet is offering another angle. There’s a pause in the proceedings as the concertina wavers around the tune itself in fragments, with bass, guitar and marimba in pursuit, then spatters of drum fall around, the clarinet circles, before imperceptibly the fiddle reintroduces the tune into the mix. There is a mesmeric evenness in the mix before marimba provides a bridge – joined by guitar and bass – into the next tune, ‘Goideadh de Ghé’ (which they got from Saileog Ní Cheannabháin), played first by fiddle and clarinet, joined by concertina before clarinet branches off to join drums, bass, guitar and marimba. 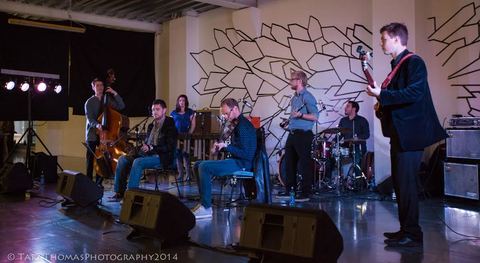 ‘The West Clare reel’ is a tune written by Peadar Ó Riada. The arrangement starts with pulses of notes on marimba and bass with a slow build up of a tiny fragment of the tune being inserted by concertina and fiddle at an interval that shortens and intensifies until the tune itself is let loose. It’s a gradual build from there whereby the tune (revealed clearly to have a strangely mischievous, slightly sinister quality) is challenged more and more by the rest of the arrangement. What will be the outcome of this challenge?

The last track is based on a reel gan ainm from the playing of Clare whistle and flute player, Micho Russell. It opens with the concertina playing the tune through twice; the double bass comes in with a simple sympathetic phrase and reshapes it a few times before the guitar and clarinet join in similarly dancing around in the afterglow of the tune. Meanwhile, the concertina reintroduces the tune, joined by the fiddle second time round, and the marimba joins in with the dancing at the periphery. Barely noticed, drumming – floor tom, loose and resonant– has been added along the bass line. The tune again gives way to the response on clarinet, guitar and marimba, but we do get a phrase of it added at intervals by the concertina, before it all folds back on itself.