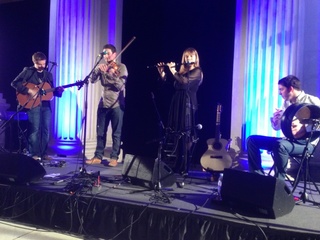 In a week that saw The Temple Bar Trad Fest take on an international flavour with performances from overseas artists, it should be no surprise that one of the highlights came from new London band Crossharbour.  Performing as part of the London Calling show Crossharbour are a new five piece that comprise of Órlaith McAuliffe - Flute/Whistle, Sam Proctor - Fiddle, Philippe Barnes - Guitar/Flute, Tad Sargent - Bodhran/Bouzouki and Rosie Hodgson - Vocals.  While their singer was absent for this performance it did not take from the enjoyment of the show.  As a band and as the opening act on the night their set and their music was simply outstanding.  They hinted that they had been in rehearsals for a couple of months, developing their stage show and working on a new album due to be released in April. This I can well believe because the impact of their music was evident from the start.

The performance was fantastically well arranged and they played with an ease that seemed not to stretch them.  As this was one of their very first live shows there was a little nervousness present, a fact they admitted to once they had finished one of their more testing sets. The reaction from the audience was hugely positive, seemingly well aware that they were listening to something special and the applause after each set was heartfelt.  With only two melody instruments guitar and bodhán filled out the sound providing a great on stage mix.  A fairly standard mix of instruments but the interplay, intros and tempo shifts generated by Philippe Barnes and Tad Sargent lifted the performance sky high.  For Órlaith and Sam, well we know how good they are individually but creating something great in a group context requires another level of creativity.  To quote the great Jon Landau, I saw the future of trad music and its name is Crossharbour.

Thanks a million Tony - we had a brilliant time!