Lorcán Mac Mathúna - Visionaries 1916 : setting the words of The Rising to music 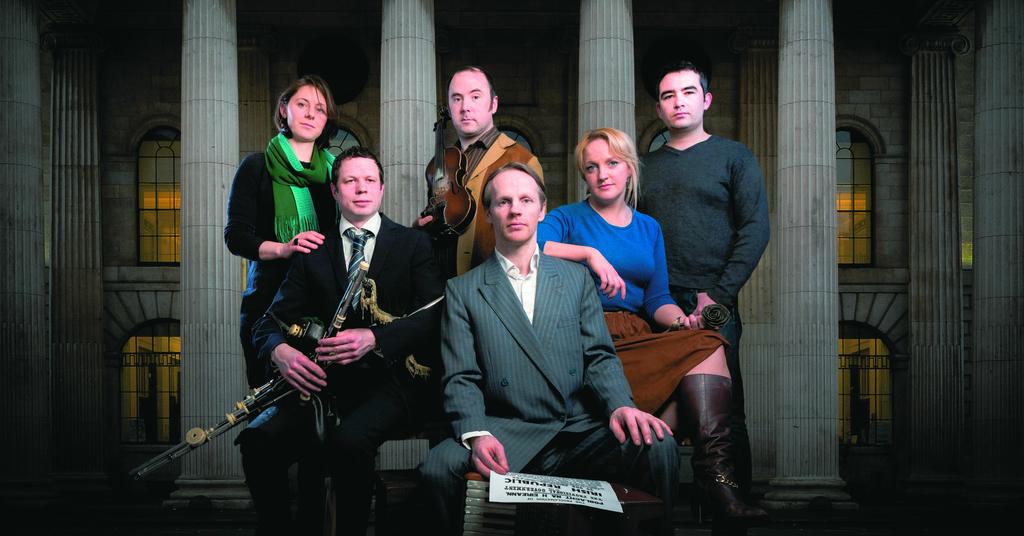 A new album entitled Visionaries 1916 is the culmination of a remarkable traditional music project celebrating the leaders of the 1916 Easter Rising through a cycle of songs using the poetry of Pearse, Plunkett and Connolly, while paying due homage to the Pipers’ Club founder Éamonn Ceannt.

Renowned sean nós singer and composer Lorcán Mathúna is the driving force behind the project, teaming with long-term collaborators Martin Tourish and Daire Bracken for the recording.

“The reason The Rising inspired so many Irish people, and indeed people throughout the world," says Lorcán, "was that it was led by people with vision who could express their ideas so clearly and profoundly. They included artists, politicians, poets, authors, teachers, and visionaries. In this album I have used their words, and only their words, to explore their ideas and vision and do honour to their memory.”

The album was made possible after the concept of a songcycle using the poetry of the Leaders of The Rising was selected for inclusion in the Arts Council’s program for the national commemorations of its centenary, ARTS : 2016. Last August, it was one of only 9 projects from across all art disciplines selected for inclusion, and six months of research and composition later, 1916 – Visionaries and their Words was ready for its world premiere.

With music by Lorcán and Íde Mac Mathúna, Daire Bracken, Martin Tourish and Éamonn Galldubh, the project has since been performed to critical acclaim at home and at the Festival Interceltique de Lorient in Britanny. Seeing the live show, one reviewer said: “Bringing the words of those who fought for Ireland’s independence, to life once again, this truly was an emotive piece of performance art."

We went to studio shortly after those first few concerts and recorded the album in a live set up to get that natural feel and energy of the concerts. Liam Grant, who also mixed and mastered, did a superb job in separating the instrumental tracks to get the full impact and energy of the live performance while also being able to give each instrument a very rich sound in the mix. We were delighted with the finished sound which was well balanced but also had the immediate feel of being in the centre of a live performance where people are actually enjoying performing. Martin puts it nicely. He says you can hear an ‘aural smile’ at certain points.

In a year awash with albums commemorating The Rising, what makes Visionaries 1916 unique is its focus on the words and writings of the signatories of the Irish Proclamation. Every song on this album, which sets seven poems by Plunkett, Pearse, and Connolly to music, was written by signatories of The Proclamation. – the only exception being an epitaph by the WWI poet Francis Ledwidge.

This album celebrates the centenary of the most inspiring moment of modern Irish history, through the lyrics of the people who led it. These were people who struggled to express an Irish cultural identity, but did it so emphatically.

The lyrics are so powerful, and I have to say they were great to work with. One reviewer of the live show -who obviously loved the whole idea- called it “a glorious exploration of what it means to be Irish.” According to Lorcán, the album was not meant to be a contemporary revision of The Rising, but a musical inspiration taken from the words and vision of its leaders recorded in their own time, in their own words, from their own pens: “So it’s not all songs of freedom and rebellion, although that theme does feature of course, but it also deals with the great passions of these men; the sort of things that any ordinary person might write about -unreturned love, language and music, hope and disappointment.”

“We saw this whole effort as not really being about us making music," he says, "but about letting our music be moulded by the art of other people. So we have diverted in style to unexpected places. We wanted to be true to the idea that we were responding to the integrity of the ideas in the lyrics, and the proclamation's signatories were passionate about many diverse things. Patrick Pearse’s poetry has a beauty which sees to the heart of rural Ireland, and of nature itself. Joseph Plunkett wrote profoundly of the spirit, employing veils of meaning whilst paradoxically expressing incredibly clarity of image.  James Connolly wrote ballads of the downtrodden and the rights of the poor and Éamonn Ceannt expressed himself with the music of the hearth of old Ireland. This album uses their own words to present a holistic picture of the leaders of The Rising; not just the revolutionaries, but the visionary reformers, philosophers, humanitarians, poets, and artists.”

On a personal note Lorcán says: “I always admired the vision and courage of the signatories of the proclamation but the more I researched their stories and their writings the more I liked them on a personal level. And I suppose that made the job a lot easier for me.”

There will be two performances of Visionaries 1916 before Christmas: the first at the Iontas Centre, Monaghan on Friday September 30th, followed by the Pearse Museum, St. Enda’s on October 15th - that second gig will mark the official Dublin launch of the album.

The album is now available on iTunes. Also visit www.1916visionaries.ie