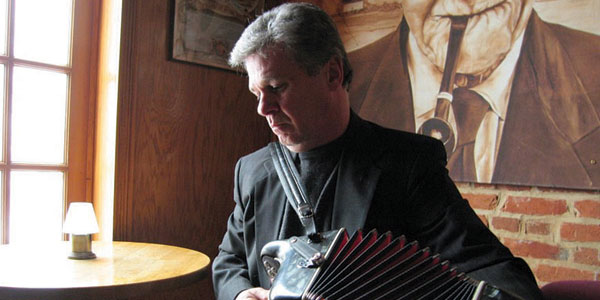 Billy McComiskey is one of the country’s greatest traditional musicians and last week he was named a 2016 National Heritage Fellow.  The National Heritage Fellowship, which is administered by the National Endowment for the Arts and is considered the highest honor our government gives a traditional or folk artist, is an extremely prestigious award given out only to the best of the best.  McComiskey, who was originally from Brooklyn but who now is based in the Baltimore-Washington DC area, is a most deserving artist and the trad community applauds his special achievement.

An All-Ireland champion, McComiskey’s had a storied life in the music.  Accordion legend Sean McGlynn’s important formative influence led to major roles in groups including the Irish Tradition (with Brendan Mulvihill and Andy O’Brien), Trían (with Liz Carroll and Daithí Sproule), Green Fields of America (with Mick Moloney, Athena Tergis and a host of others), and the Pride of New York (with Brian Conway, Joanie Madden, and Brendan Dolan).  An in-demand teacher with a sterling reputation, McComiskey is one of the community’s most loved musicians.

Congratulations to Billy McComiskey and his family on this richly deserved honor!  For more information about McComiskey and the National Heritage Fellowship, visit tinyurl.com/McComiskey2016.

In the player this week is the band Arum’s self-titled debut.  Arum comprises Alan Reid (banjo, bouzouki), Conor Crimmins (flute), Karen Hickey (fiddle), and Martin Barry (guitar; table tennis paddle), and the individual members come from Co’s Leitrim, Clare, Mayo, and Down, respectively.  As a unit, however, they are based in Limerick and have been getting a good bit of traction in the past year.  This, perhaps, because while the group looks like a traditional quartet, their stock-in-trade is an idiosyncratic but engaging and highly polished approach to boundary pushing that is resonant with what many young musicians bands these days.

The first thing you hear when you put on this album are the familiar sounds of modern traditional music – flute, guitar, banjo, and as the opening track wears on, fiddle.  However, while the group’s music is firmly rooted in the sounds and techniques of modern traditional music (and I am thinking of groups such as Solas and Lúnasa) its members draw on a diverse set of influences and a sensibility that represents a much more progressive palette, which are two things that become very apparent as the album unfolds.  I’m thinking specifically of moments like the ostinato toward the end of “The Flang” that perhaps suggests some of the minimalist works of Philip Glass or Steve Reich; the rich textural overlays in “Geo Sound,” the emotionally wrought arrangement in “Harbinger,” and the “hard” intro that recall the drama of stadium rock epics; and the song “Brightest Sky Blue,” with it’s liberal use of atmospheric textures, discordant notes, and evocative signal-processing.  In this context, these elements take what might be a fairly flat song and transform it into an event.  With this being said, even the more familiar and somewhat straight ahead tracks have transformative elements that distinguish them from orthodoxy. “Arum” is a very compelling, forward thinking album and will appeal to those who love imaginative modernity with an ear for the past.  Some readers might not be surprised to learn that Pádraig Rynne (www.padraigrynne.com) was involved in the recording process, as there is some philosophical congruence between Arum’s music and that of Rynne's group Notify.  Ultimately, this is a strong album that communicates the band’s musical vision extremely well.  However, given how crisp the playing is, I am also curious to see what kind of life these arrangements would take on a performance situation – I imagine the results would be exhilarating.  For more information about Arum and their album, visit www.arumireland.com.