We are delighted to announce that the Tradconnect Album of the Year Award for 2016 goes to Mick, Louise & Michelle Mulcahy for their album “The Reel Note”. An independent panel of judges were involved in the final selection, with “The Reel Note” winning both the judges vote and the public vote in our end of year poll.

The INEC Killarney sponsored the award, and The Mulcahy’s will pick up a winner’s cheque for €3,000. The INEC Killarney runs two of Ireland’s best traditional music festivals including The Gathering festival which takes place on 22nd - 26th February 2017, and Killarney Folkfest on July 8th-10th 2017.

Managing Director of The INEC Patrick O’Donohue said: “Congratulations to the Mulcahy family on their fantastic album. Their talent for and love of traditional music is evident in every note.”

‘On winning the award The Mulcahy Family said: “We are thrilled to receive the great news that our new album ‘The Reel Note’ has been awarded Tradconnect Album of the Year. We would like to extend a heartfelt thank you to Tradconnect, INEC Killarney, the panel of judges and all who voted for us. We are truly humbled and honoured to receive this award, as there were many superb albums released throughout the year. The album is a celebration of the music we play together as a family and represents the joy the tradition brings us. We look forward to continuing to share our music at home and abroad. Míle buíochas, Louise, Mick agus Michelle Mulcahy.”

‘The Reel Note’ has already received worldwide acclaim from over 110 Irish radio broadcasters that have listened to it through our Download Centre on Tradconnect. 2017 Gradam Award nominee Mick O’Connor knows the Mulcahy’s better than most, and provides an honest appreciation of their contribution to traditional music in the liner notes.  Regarding this album he describes it as “first class,” stating that the Mulcahy family is universally acknowledged in traditional music

circles as extraordinary musicians. This album shows, “an implacable discernment, taste and respect for the continuity of the tradition,” he says. “The Mulcahy family represents a new generation of musicians who have made a serious study of the music and are poised to bring it to a new height. No gimmicks, syncopations or other distractions, just extremely good music played by exceptionally talented musicians, across a range of instruments, and all played to a very high standard.” You can read our full launch article here

The album was released on the Cló lar-Chonnacht label, and General Manager Deirdre Ní Thuathail said : "We are delighted to hear that Mick, Louise & Michelle Mulcahy have won the Tradconnect Album of the Year Award 2016 for their wonderful album The Reel Note. The Mulcahy family always bring the highest professionalism to everything they do, combined with a love and respect for the tradition. It has been a great pleasure to work with them on this album and a great joy to see the welcome that it has received both from the judges and the public vote."

The album was recorded by Tony O’Flaherty at Sonas Studios in Killarney and all tracks were arranged and produced by Mick. Louise and Michelle. Photography was by Anita Sadowska-Horne.

A special word of thanks must go to Patrick O’Donohue and his team at INEC Killarney for once again putting up the sponsorship for this award and for working with Tradconnect in supporting artists and highlighting the very best in traditional music each year.

The album is now on release and can be purchased from www.cic.ie/en/music/ and it can be downloaded from www.cdbaby.com

For more information on this years Gathering Festival, click on the image below. 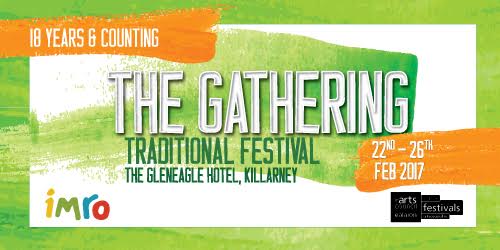 Comment by Martin Thompson on February 8, 2017 at 17:07
A great album with some beautifully played tunes....not been out of the cd player yet!

Congratulations to the Mulcahy family, Mick, Louise and Michele! Hard work and dedication won this award! Looking forwards to many more years of this the best Irish Trad band in the World today, Go hana mbaith ar fad!