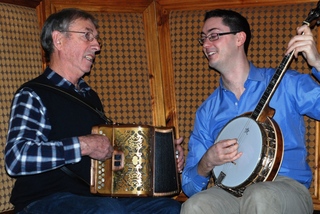 Emerging from a quiet session, this April sees the launch of an exciting duet album from two great friends.

For the past few years, accordion player John Cronin and banjo player Daithí Kearney have enjoyed playing a regular session in Wallis’ Bar in Midleton, a town not usually celebrated for Irish traditional music.  John came to the town in the 1970s and Daithí some 35 years later and both brought with them a deep love of the music of the Sliabh Luachra region on the Cork and Kerry border.

This recording is a snap shot of the session in Midleton but draws heavily on the music of Sliabh Luachra and particular accordion players Johnny O’Leary, Denis Doody, Jackie Daly and John Brosnan.  It also features music sourced to John’s father DD, a fiddle player from Glenamuckla in the parish of Newmarket, Co. Cork.

John’s connections to Sliabh Luachra are strong.  Pádraig O’Keeffe used to come to the house to teach his uncle John. Later Denis Doody, Julia Clifford and Con Curtain, as well as perhaps less well known visitors including Billy Mahony and Dan Fitz, would call in for tunes.

Daithí is lecturer in music at Dundalk Institute of Technology.  He grew up performing as a musician, singer and dancer with Siamsa Tíre and is a former member of the band Nuada, who were nominated for an Irish Music Magazine award in 2005.  His PhD focused on regional identities in Irish traditional music and he has published widely on various aspects of the tradition.

On the album John and Daithí are joined on some tracks by regular guests at the session in Wallis’ Bar: Barry Barrett , Mike Cummins, Louise and Shane Keating, and Imelda McCarthy.  However, this is essentially a duet album with a diverse selection of tunes drawn largely from the Sliabh Luachra repertoire, the titles of which celebrate the people and places of the region.

"Cronin and Kearney are playing dance music, and it shows... a very enjoyable duo recording"