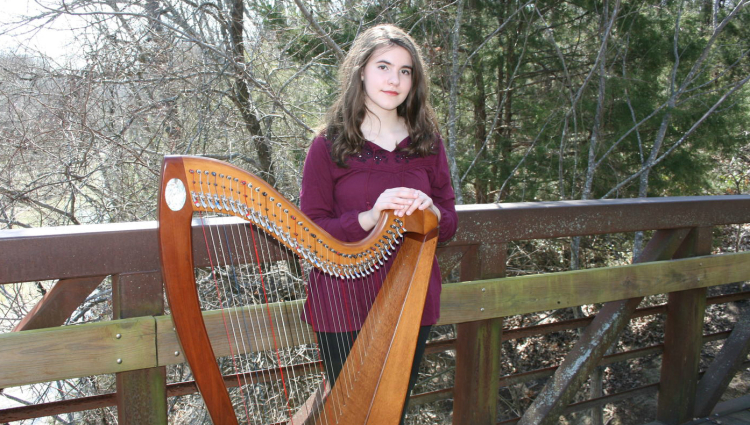 In the middle of the United States we have vast oceans of grass. We call them prairies. On the British Isles, the square mileage is a bit more subdued, but they have some, too. They are called moors. Expanses of grasslands that feed man and animal and provide a living. But in some places, they craft magik. Sarah Copus’ debut solo album is called Moorland Winds and she is that breath of fresh aire that everyone talks about. She has created that magic using instrument and voice on a fourteen track album filled with Celtic, pop and traditional Irish music.

Sarah Copus is the daughter of Pamela and Randy, the duo behind the ever popular New Age band 2002 in which Sarah became a member several years ago. Sarah has turned out to be not only a fine multi-instrumentalist, but also a stellar songbird. At the tender age of thirteen she has built a reputation as an award winning vocalist and player, she has appeared on several albums, both as lead and accompanist, and she has opened for well-known performers such as Emmet Cahill of Celtic Thunder.

The album opens with the tune Wind on the Moor. Sarah’s voice is soft, sweet and untainted by over production. The song was made popular by a group called Nessa, but remains largely in obscurity until now. The old Scottish ballad is an unpretentious story of the winds that sing the songs of yearning and love. The stories are sad as the lover rambles over the moors. Sarah sings the lyrics as if it is a prayer.

From Sting’s Ten Summoner’s Tales come the hit tune Fields of Gold and Sarah’s rendition adds a softness to the ageless ballad. Although the song was penned in 1993, there is a sense of the turn of the century in its phrasing and lyrics. The sun in its jealous sky beams as storyteller Sarah adds ethereal elements in voice as does her harp playing.
The mood changes sharply as the tune Merrily Kiss the Quaker/The Mist Covered Mountain takes the stage. The part of the harp is complex, but downright exuberant. Merrily Kiss the Quaker is a variant on an old jig and it’s hard to believe the song is about baking, while The Mist Covered Mountain entertains the body as a lively dance tune. Apparently, Sarah has nimble fingers. Incidentally, she is joined on this album by the talents of Nathan Kennedy on fiddle, Rick Holt on bodhran, Randy Copus on guitar and Pamela Copus on whistle.

Sarah continues to display her artful harpestry on the instrumental tune Dawning of the Day. The tune is unhurried and comes upon the body like the warmth of a new day. The song was written by noted harpist and composer Thomas Connellan, the 17th century composer who is noted for his song Carolan’s Dream, which is a standard today.

Copus covers one of my favorite songs, Walking in the Air from the animated feature, The Snowman. It is a present day classic covered by over forty artists from Angelis to Mary Black. In it Sarah’s voice is a flawless match to Howard Blake’s score and lyrics. Thanks to her magic vocal we, too can ascend into the heavens with the snowman, watching our silent world below without a care in the world. Has white ever looked more beautiful? Cathal McGarvey’s ballad, The Star of County Down is a quiet, slow tune with a drifting quality. Sarah’s interpretation is idyllic with her harp sparkling in the starlight. The story is unusual because in this tale, the guy loses the girl because she gets on a ship to America. The sense of yearning is prevalent throughout the poignant instrumental.

Lastly, Sarah performs one of the most beloved tunes in the Irish traditional songbook, She Moves Through the Fair. This timeless folk song is about love, pure and true, but the ending is less than desirable if the account is to be believed. Sarah’s voice is pure and true as well with more than a soothing timbre. It is not a whisper and it is not an undertone, but a gentle story voice.

With the release of Moorland Winds, Sarah Copus is on the first step of her budding career. It is a wonderful debut for this young talented songstress and harpist. She gains favor with the familiarity of the tunes, making the listener comfortable and nostalgic. If this be a first effort, then the future is assured.

Moorland Winds is the marriage of music and magic brought about by the creativity of talented harpist and extraordinary vocalist Sarah Copus. Celtic, Irish Traditional, and pop favorites are woven into a fabric of strong musical textures, ethereal vocals and masterful instrumentation. In no time at all, every one will be a favorite. Highly recommended. – R J Lannan, ZMR

Moorland Winds is now on release and can be purchased from iTunes and from www.sarahcopus.com.