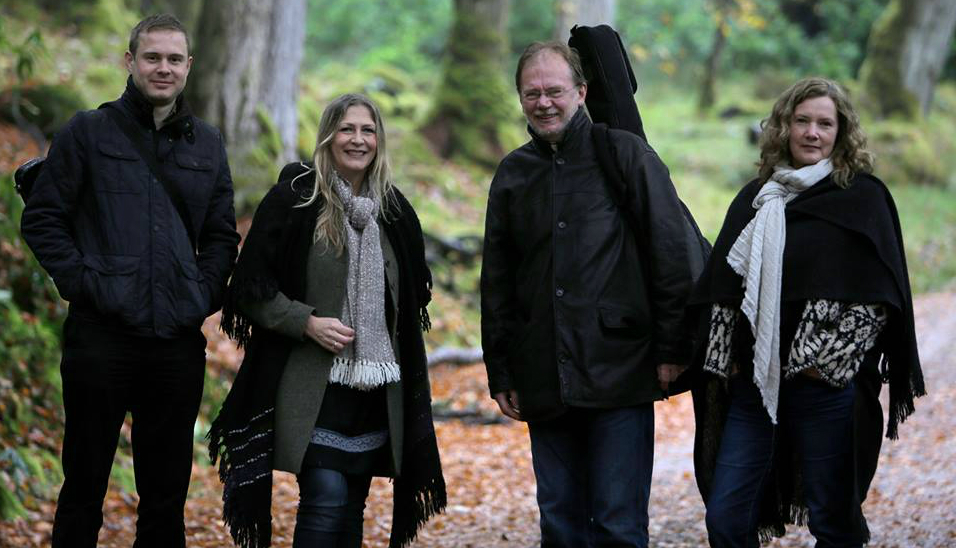 Na Mooneys is the new release by the Ó Maonaigh family from the Gaoth Dobhair Gaeltacht, in North-west Donegal, an area steeped in traditional music, song and culture.  They call themselves Na Mooneys as that is the name they are referred to by, locally in Gaoth Dobhair; “Na” being the Irish for “The”, and “Mooney” being the English translation of their surname “Ó Maonaigh”.

Mairéad’s reputation is international through her music and work with the renowned groups Altan, String Sisters, T with the Maggies and also by her solo work. Ciarán is also well known internationally for his music through his playing with Caitlín & Ciarán and Fidil, and also as a solo musician, having achieved Ceoltóir Óg na Bliana (Young Musician of the Year) at the TG4 Gradam Ceoil. Anna was a member of Macalla, the all women musical group, and has worked on television production, and organised The Frankie Kennedy Winter School. Gearóid was a member of Ceoltóirí, Altan and Ragairne. He is always at the session in Hudí Beag's bar in Bunbeg and is a founding member and organiser of The Frankie Kennedy Winter School.

Their father, Francie Mooney was a well known local teacher and fiddle player. He was also a prolific writer and wrote songs, plays and dramas for the local community theatre group, Aisteoirí Ghaoth Dobhair. Their mother, Kitty Rua (née Gallagher) came from a musical household, her father and uncles played melodeon at dances and gatherings. The Gallagher home was a well known ceilidh house where all the young people would gather for dances and that is how she met Francie.

As a family they have always played music together, and at sessions. This is their first foray into formally performing together as a group.

Our sample track is the well know reel, The Morning Dew. This features Mairéad, Anna and Ciarán with Manus Lunny on keyboards.

They are joined by their co-producer, sound engineer and musician, Manus Lunny, who also recorded the album in his own studio.

“We also invited Caitlín Nic Gabhann to join us on a few tracks on concertina and foot percussion. She just happens to be married to Ciarán, so she is definitely family! We also have Mairead's daughter Nia, who happens to be the youngest of the clan, as a guest on a few songs and she also plays fiddle on a few tracks.”

On this recording they have delved into their family repertoire and remembered the tunes and songs which they were brought up playing and singing when they first started.

They say: “We were reminded of tunes like, ‘All the Way to Galway’ and ‘Moneymusk’ highlands, which we got from our father, who in turn learned them from his mother, known locally as Róise Bheag Róise Móire. She played the concertina and melodeon. Also, there are a few newly composed pieces as in Ciaran's march for his wife, Caitlín Nic Gabhann; ‘The Cavanman's Daughter’; Mairead's mazurka for her niece, Anna's daughter, Róise Ní Mhaonaigh and the melody of the song ‘A Óganaigh Óig’, we found the lyrics in an old collection of songs called ,'Dhá Chéad de Cheoltaibh Uladh’ ( Two hundred Ulster Songs). Mairéad had composed the first part of the melody before going to the studio and it was completed in the studio before recording it helped by Manus and Anna!”

Mairéad says: “I’m glad that we got to record together like this, and I’m very please and excited by the recording”

The album is now on release and can be purchased from Bandcamp and you can also visit their Facebook page www.facebook.com/NaMooneys/