New album and September tour by The Alan Kelly Gang 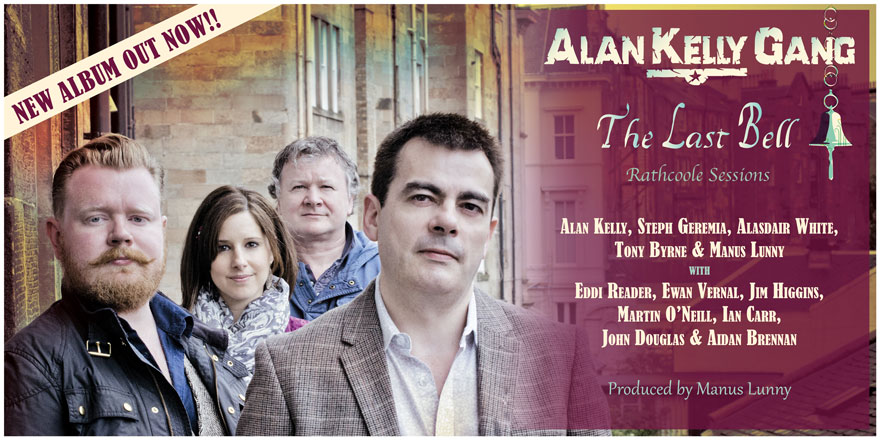 The Alan Kelly Gang have announced the release of their anticipated new album, The Last Bell followed by an 8 venue nationwide tour joined by special guests, the inimitable Eddi Reader and John Douglas between September 27th and October 5th, 2014.

Stalwarts of contemporary trad, the Alan Kelly Gang are a creative force all about tasteful arrangements, groove, energy and musicality of the highest order. Their new album, The Last Bell, which has been over a year in the making, is an uplifting, pristine collection of original and traditional music that inspires a feeling of joie de vivre throughout. Recorded over two live sessions in Rathcoole, Co. Dublin with an A-list cast of cohorts: Alan Kelly (piano accordion), Steph Geremia (flute /vocal /sax & whistle), Alasdair White (fiddle), Tony Byrne (guitar), Manus Lunny (bouzouki), Ewan Vernal (bass), Martin O’Neill (bodhran) and Jim Higgins (percussion), the album captures a magic that ensues when such outstanding musicians are locked away, working together in musical solidarity. “I wanted to capture that raw energy and spur of the moment musicality. I also wanted to recreate the vibe and excitement of the sessions when I recorded Mosaic (2000) by playing live with drums, percussion and bass.” Alan Kelly

On this outing, you can sense the bands maturity and musical cohesiveness. There is a complexity of intricate layers on tracks such as the Wedding Reels and the intriguing 7/8 timed Low Flying Polo. There is also a healthy offering of original works by band members and their musical peers, including the effortless and bewitching slow march, January Gales, a song inspired by the classic poem of Arthur O'Shaughnessy, Music Makers, the dreamy After the last Bell Rings and poignant Poorest Company. The album also features guest lead vocals by Eddi Reader on The Sleeping Policeman.

Since their last album venture, Small Towns and Famous Nights, the gang have welcomed Scottish fiddler, Alasdair White (Battlefield Band) into the mix and have spent the past 2 years making high profile festival appearances, as well as breaking ground entering the North American circuit. They have also welcomed Capercaille’s Manus Lunny on board and into the Producer’s chair, who has brought along his distinctive panache to the 12 tracks – 8 instrumentals and 4 songs.

This is traditional music for the right here and now, it’s fresh, playful and exciting. Most certainly “a drive and energy that will keep the chill out of the coldest winter night” Folk Radio UK. Source : Press Release