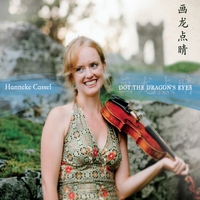 "Raised on the Oregon Coast, Hanneke Cassel (“hahn-uh-kah castle”) began playing violin at eight years-old, but a local fiddle competition inspired her to take up traditional fiddling. A few years later, at fourteen years old, she entered a Scottish fiddle contest, winning the national title. Years later, after numerous trips to Scotland, and studies with the great fiddlers Alasdair Fraser and Buddy MacMaster, she moved to Boston and enrolled at the Berklee College of Music. Coming to Berklee in the early days of their groundbreaking strings program, Hanneke has since been at the forefront of a national fiddling revival, helping define the instrument for a new generation.

As a fiddler, Hanneke’s sound is a blend of Scottish and Cape Breton traditions, as well as some early roots in Texas fiddling. But she also draws heavily on experiences working with street kids in Kenya (many of the songs were commissions for them), her 10+ trips to China (she lived and taught in Shanghai for a while), and her friends and relationships built around the scene in Boston."