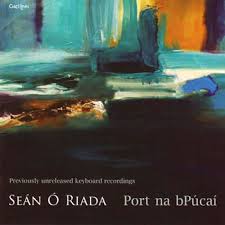 Gael Linn today release a very special album that has been 40 years in the making. Port na bPúcaí is a major new album that features previously unreleased material from Séan Ó Riada's final concert recorded in 1971.  This was just five months before his untimely death at the age of 40.  In addition to recordings from this concert there are a number of additional tracks from March 1971 and also from 1966.  O' Riada weaves his usual magic spell as he presents these works on piano and harpsichord.
.
It includes some classic versions of great airs like Do Bhí Bean Uasal, Carraig Donn and Sliabh na mBan as well as other airs that Ó Riada himself introduced to Irish audiences , such as Aisling Gheal, the title track Port na bPúcaí.  This is an important addition to the works of Séan Ó Riada who played a major role in the popularisation of Irish music in the twentieth century.

During the week we spoke to Séan Ó Riada's son Peadar who unusually also releases an album in the same week.  He said that "Port na bPucaí” is a very rare phenomena – a voice from the grave - Seán Ó Riada’s album 43 years after his death.  He never intended the recordings to be an album. But he was playing with the idea of such a solo project.   During the early ‘60s, he introduced Port na bPucaí to the world outside of Dun Chaoin. He had learnt it from his friends, the island men who heard it coming up through the floor of their Inis Mhic Aoibhleáin cabin. Over the last half-century, many have used it as their indigenous musical, remotest boundary.  For me it has been the sound of my childhood – this piano playing of colour, mood, love, ideas, aspirations and dreams expressed by shifting tone scape.  Seán Ó Riada was the first I heard with the idea of concept albums in the early sixties. He still manages to bring new sound to our native musical expression."
.
On next Thursday 22nd May we will have an Official Album Launch for Peadar's new album Through Banks of Mist with Seán Ó Sé.
.
Both albums are available from www.peadaroriada.ie or from www.gael-linn.ie