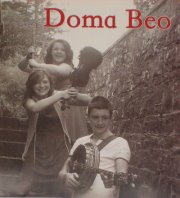 It is always a pleasure to see new youngsters coming through and recording at a very early age. In Doma Beo we have a new  three piece trad band from Longford, formed just a few months ago. They have been best of friends for some time as well and comprise Maria Matthews (16) on vocals, whistle, flute, and keyboard.  Liam Doherty (15) on banjo, mandolin, guitar and bouzouki.  Laura Doherty (13) on fiddle, harmonica, mandolin and guitar.  These members were previously in a group called Ríl Óg who were/are members of TradConnect. They recorded and album which we reviewed on here. As is the way sometimes with the ever changing nature of bands they split up and these three members wanted to keep on playing their music and so decided to set up Doma Beo.

No hanging about with these guys. Straight into Railway Road Studios in Belturbet, Co Cavan to record a new CD simply called “Doma Beo”.  It will be available on August 5th when they will have their launch night in The Bent Elbow, Drumlish, Co Longford. It will also be available in Dennistons Music Shop Longford, their local shops in north Longford and can also be ordered by email-domabeo@gmail.com.  Highly rated banjo player Darren Maloney produced. We understand a copy is winging it's way to us on Tradconnect so we can't wait to have a listen. Watch this space as they say. Check out their Facebook page and give them your support. Doma Beo Facebook