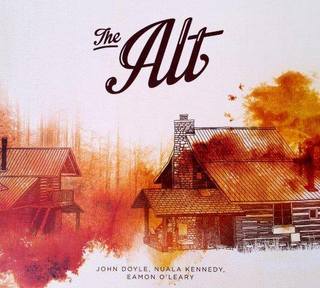 This week see’s the launch of a new group and a new album by three well established musicians.  The group is called The Alt and it features John Doyle, Nuala Kennedy and Eamon O’ Leary.  Included below is the first track from the album plus the official press release.

The beautiful mountain Knocknarea in Ireland’s County Sligo is said to be the final resting place of the ancient Irish warrior-queen Maeve. The ‘Alt’ is a storied glen on the side of Knocknarea, and it was in the shadow of this glen in the little village of Coolaney that the three master Irish traditional musicians in The Alt–John Doyle, Nuala Kennedy, and Eamon O’Leary–first gathered to rehearse. The old ballads, winding tunes, and freshly discovered songs that each artist brought to the table reflect the pure love of the song that has made Irish music so beautiful and compelling over thousands of years. It’s this same love of the song that the Irish brought to America, nestling into their new homes in Appalachia and forming the bedrock that would bring us American country, bluegrass, and old-time music. The Alt are fully aware of this history, and in fact chose to record their debut album in the quiet isolation of a small cabin in North Carolina’s Appalachian mountains. Alone with just the scurrying sounds of little mice accompanying them, each of these master musicians was able to use their partnership to touch at something deeper in the music, something swift and beautiful and magical that has always run beneath these songs.

Guitarist and singer John Doyle, whose family hails from around Knocknarea, was born and raised in Dublin, lives in Asheville, NC, and is one of the pre-eminent guitarists and vocalists of his generation. His ground-breaking work with Irish band Solas and with Karen Casey has influenced many other artists and his style of guitar accompaniment is iconic in Irish music. He met flutist and singer Nuala Kennedy at Celtic Colors and while touring in Europe and the two hit it off while exploring songs and tunes in common. Nuala is herself a singer and songwriter well known internationally for her beautiful vocals and her unusual arrangements of traditional songs as showcased on multiple solo albums for Compass Records. Looking to add a third voice to the band, John suggested his long-time friend and fellow Dubliner Eamon O’Leary, who also plays guitar and bouzouki. O’Leary is one of the most in-demand Irish vocalists and guitarists in the US today thanks to his subtle and beautiful work with Jefferson Hamer in The Murphy Beds. Each artist in The Alt delved into their own pasts to draw forth the songs on their debut album. Though each member is a fine songwriter in their own right, for this first album The Alt give their attention to traditional Irish songs. Some of the songs they grew up hearing and others they have collected along the road, from friends and mentors, from archival recordings and written collections.

Gathered in the mountains of North Carolina, The Alt recorded their debut album in just three days, a testament to the ease each member feels with their native music.  The singular sound of The Alt that came from this recording session is greater than the sum of its parts; at once delicate, deliberate and always in deference to the song at its core.

Listen to album and purchase https://thealtmusic.bandcamp.com/releases

great singing, accompaniments and solos - more tracks are on folkalley at