Hello all you Micho Russell fans out there.!! For those interested, there's a brand new Micho Russell album out, compiled by life-time Micho Russel fan Bill Ochs of Pennywhistle press. The album is named Rarities and Old Favourites, and spans the period of 1949 to 1993.  It is compiled of 49 tracks, most of those private recordings from Bill's private archive. In Bill's own words :

"Even though some of these tunes were on other Micho albums, he had a special magic in certain situations and that's what I was going for when I chose some of those selections.

Out of sixty or so pieces on the forty-nine tracks, there are more than twenty that don't appear on any other of his releases. If we combine those with the selections that were on out-of-print recordings, close to half of the tunes fall into the category of Micho pieces that even some of his devoted fans will have never heard. So those are the "rarities." And then there are the old favorites, hopefully all showing different sides of Micho."

If you don't mind, I'd appreciate it if you'd share news about the release in your musical circles. There is a little drop-down triangle on iTunes next to the "Buy" button that gives options to  share on Facebook or Twitter, tell a friend, etc.

So, to give Bill a hand, I decided to place this blog as a little promotion for  Bill and Micho (who actually would have celebrated his centenary today)

The album is availlable as download on iTunes, for a mere Euro 8.99, which, in my humble opinion is a real bargain.....

There's a digital booklet included telling the tales and details of the tunes included.

It's also Bill's intention to put the video that came with Micho's "Ireland's whistling ambassador"CD on youtube later this year. This vid contains one of Micho's last concerts, in Washington DC, and an interview with NY Times. And also a book on Micho is planned for release at the end of this year, so keep an eye out. If there's any news I'll let you know......

For the CD Rarities and Old Favourites, you may find it here : 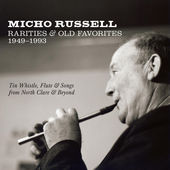