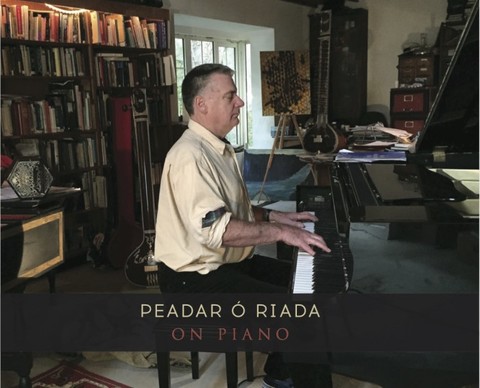 Peadar Ó Riada has just released a new double album of piano music.  Regarding the recording he said: “ I recorded this album as I have been fiddling on the piano since my father died in October 1971 and denied that it was such an important tool for whatever little creative expression I have. I don't compose using the piano but find that I can express myself and paint in sound with it in a way that is not so rewarding with other instruments. I disrespected its versatility. It has been a comfort in times of stress. The piano I had used and played on was that of my father and that, I did with a sense of guilt as it was not my piano - it was my father’s. I associated my playing on his instrument with my inadequacies as a composer, and musician, when compared to his genius. But with age comes sense and I discovered that there were people who liked what I did also - I “chilled”. I lately discovered crowdfunding and my good wife, Geraldine, inherited a little nest egg from her father Jimmy and I bought a piano of my own and recorded this album in the following weeks. Here it is now and I filled the recording space with pictures of emotions and people and things that I love and some that I miss greatly.”

“There is some unfinished business here also as I never allowed myself to contemplate much on the death and loss of either my father Séan or my mother Ruth - it has been a territory too terrible to travel for the last forty years. Armed with my new piano, I have taken a few steps into its unchartered realms. There are no choirs or fellow musicians or tricks of multi-track recording or any other camouflage for me to hide behind in this album and I hope that you find something in it that resonates with you and makes your investment of your time and money worthwhile. There is no reverb or mixing or other such tricks -just me, 2 mikes (Rhodes) the piano in my room and you, the listener at this end.”

He recently recorded this homemade video featuring one of the tracks. The album is available from www.peadaroriada.ie