Washington DC musician John Kerr has just launched a new album of traditional music with a number of long term musical friends. The album is called Two Old Black Sticks and on it John is joined by Joe DeZarn fiddle, Patrick Cavanagh banjo and accordion, Crystal Bailey fiddle, Peter Brice accordion, Josh Dukes guitar, Keith Carr bouzouki and Jim Stickley bodhrán.
.
Sometimes the best description of what the music is about comes from the artist themselves, and in the liner notes to the album John sets out a very honest summary of his journey into music. He starts by saying that "most Irish musicians grow up with the music, surrounded and encouraged by family and community, with teachers, peers and mentors to guide them on their way. I had no such luck. I was nearly thirty years old when I first heard this music.
.
After dancing to it for a few years, I decided I wanted to play it. With no guru, no method, no teacher, I had no choice but to immerse myself in it wherever I could find it, and hope for the best. Almost without exception, the local Irish music and dance community in Washington DC and Baltimore — shepherded then as now by Brendan Mulvihill and Billy McComiskey — welcomed me and encouraged me from the first day I showed up at a session.
.
.
I travelled to summer schools and festivals in West Virginia, Boston, New York, Seattle, Miltown Malbay and Feakle in County Clare to sit at the feet of great flute players such as Jack Coen, Catherine McEvoy and Kevin Crawford and learn what I could about Irish music and how to play it. It took a while, but about 20 years on I actually began to think of myself as an Irish musician, and I think the Irish music community did so as well. I wrote about the whole process a few years ago in a book, also called Two Old Black Sticks, that is still available on amazon.com for less than a ten spot. Check it out if you’d like to learn more about the man and the community behind this music.
. 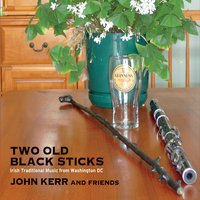 This recording is dedicated to the memory of my aunt, Louise Hibbs (1926-2013), whose inheritance provided the money to produce it, and my brother Jim Kerr (1959-2001), whose single malt whiskeys helped fuel the recording session.
.
On this recording I play a Rudall and Rose eight key flute in D, circa 1840, restored by Patrick Olwell, and a keyless flute in C made by Patrick Olwell. The others can tell you all about their instruments whenever they do their own recordings."
.
The included track above is called Imelda/Mulling a Vat.  It features John (D flute), Josh (guitar), Joe (fiddle), Keith (bouzouki).  On the tunes John says "I first heard Imelda Roland’s played by Kevin Crawford on a boat in Boston Harbor during Gaelic Roots week, and I liked it so much that I forced him to teach it in class the next morning. I got the Reel of Mullinavat from playing with Joe DeZarn and the rest of the Bogwanderers Ceili Band many years ago. Flute and fiddle is my most favorite combo in all of Irish music, and Joe is one of my favorite fiddlers to play with.  I’m extremely glad he was able to join me on this tune and others on this recording."
.
The album is now available to Download by clicking on the image below