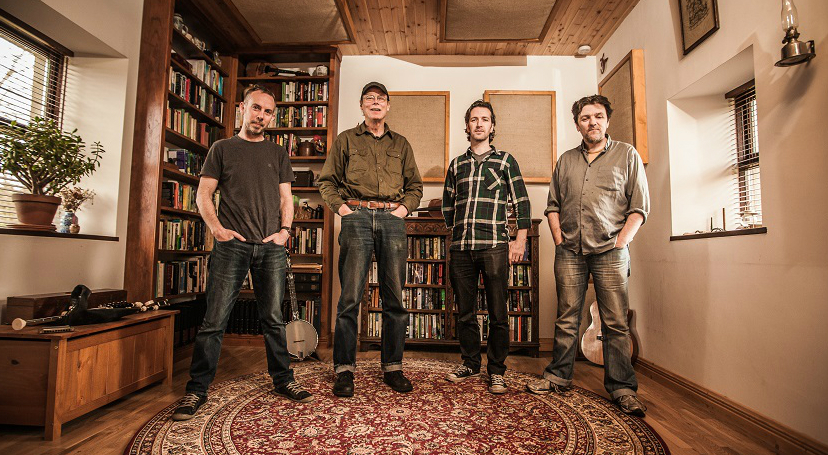 Repost : New Road play Whelan's Dublin on Monday 8th May. We recently posted this article in support of their debut album.

Leonard Barry from Kerry and now living in Sligo has been described as “a master” by Living Tradition. He has released two solo CDs, “Mind the Pipes” (2002) which was named amongst the top recordings of that year in The Irish Times and “New Road” (2013), described as “music as it should be” by fRoots.

Rick Epping is a legend of the folk music scene. From California, Rick is one of the world’s leading harmonica players. An All-Ireland harmonica champion and founding member of Pumpkinhead in the 1970s, Rick went on to record with Andy Irvine, Mick Hanley and others, to recording the CD “Jiggin’ the Blues” (2008) with Frankie Gavin and Tim Edey, to playing with Arcady, Sean Keane and The Unwanted, as well as such musical greats as Joe Cooley, Doc Watson, Mance Lipscomb and Bill Monroe.

Andy Morrow from County Leitrim is from a family steeped in traditional music and has played the fiddle from the age of eight. In 2005 he recorded with Tony O'Connell and Arty McGlynn what is widely regarded as a modern classic in traditional Irish music, receiving rave reviews.

Seamie O'Dowd from County Sligo is one of the most loved and respected musicians in Ireland today. Also a member of The Unwanted, Seamie has recorded two solo CDs, “Headful of Echoes” (2006) and “Wood and Iron” (2013), which was named amongst the top recordings of that year by Hot Press. He is a former member of Dervish and plays with Máirtin O'Connor and Cathal Hayden, recording “Crossroads” (2008) and “Going Places” (2012).

This is track 9 from the album and includes Tommie Potts’ Hop Jig, The Rocky Road to Dublin and John Kelly’s Hop Jig. These tunes are associated with three iconic musicians in Irish Traditional Music: the first from the great Dublin fiddler Tommie Potts (1912-1988), the second from Seamus Ennis (1919-1982) and the last from West Clare's John Kelly (1921-1988).

“New Road explore roots that extend across the Atlantic, incorporating Irish traditional, Appalachian old-time, blues and beyond, and bringing to the stage a musical experience full of passion and exhilaration, depth and beauty.”

The journey through these musical landscapes is laid out in the opening three hornpipes: a rare version of “Road to Lisdoonvarna” is kicked off with pipes and fiddle, followed by “Keep the Old Ark Rolling”, an American hornpipe that introduces harmonica and 5-string banjo, and ending with “The Blackbird”, a classic tune common to both sides of the Atlantic.

The Appalachian tradition of songs wrapped in fiddle tunes is up next in the modal “Greasy Coat”, while the traditional love song “Galway Shawl” is given a tender blues introduction with slide guitar and harmonica, culminating with a set of reels by the group in a 12-minute tour de force.

Throughout the 13 tracks, consisting of Irish and American reels and hornpipes, jigs and hop jigs, slides, waltz and songs, Leonard, Rick, Andy and Seamie play the music as they hear and enjoy it, without contrivance, but with the full expression of their mastery of instruments and tradition.  The result is an album full of surprise and delight, flowing easily from genre to genre, start to finish.

Guests on the album include bodhrán legend Johnny “Ringo” McDonagh of Arcady and De Dannan, Cathy Jordan of Dervish, and Sligo guitarist Shane McGowan, who has performed with Lunasa, Sean Keane and Indian percussionist Zakir Hussain.