The band premiered in 2015 with performances at The Celt and Trinity Hall – the leading Irish pubs in North Texas, and has since had over 50 shows between those two venues. They were ranked in the top 5 best Irish bands in Texas by the Dallas Observer newspaper. The have also performed in many other venues, festivals, retreats, and weddings. They performed in 2015 at the O’Flaherty Irish Music Retreat – one of the leading music retreats in the US. They were also selected to open for Emmet Cahill of Celtic Thunder.

This is Track 1 from the album, the well known O'Carolan composition Sí Bheag Sí Mhór.

Jesse Ramirez is a Celtic finger style guitarist, and has a masters in guitar performance from University of North Texas and was most recently professor of music at Mountain View College. He played in the Celtic Ensemble at Texas Tech University with Roger Landes during his 4 year undergraduate degree. Nathan Kennedy is a national award-winning Irish fiddler who was the first youth fiddler from Texas to compete in the world championships of Irish music, the Fleadh Cheoil in Sligo Ireland. He has taught music at the North Texas School of Irish Music, and also plays with the TIMES Session Players with Ken Fleming. 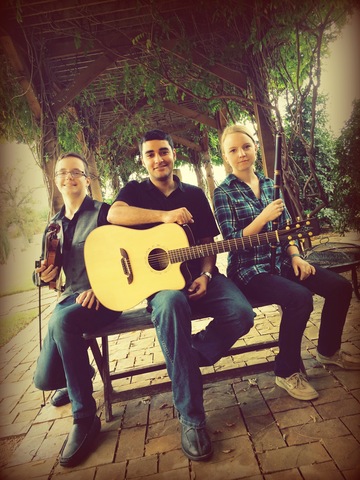 Meg Tapley has been playing Irish pennywhistle for over 10 years and just completed her flute performance degree from UNT. She is currently performing in several other ensembles as well as teaching flute as a private instrument teacher to middle and high school students.

The band also features Bill Zanuer, an upright bass player that has played in a variety of genres from Celtic to jazz and classical. Matt Cook is the current lead singer for the highly popular Dallas singing band, Sluggers Rule. He also plays Bodhrán, mandolin, and octave mandolin.

“This album is the inaugural release from the band and is a true musical delight. It features the amazing Celtic fingerstyle guitar of Jesse Ramirez that will remind many of the work of the legendary Randal Bays. It also features world class Irish fiddling from Nathan Kennedy, and beautiful flute and whistle performances from Meg Tapley. Matt provides great Bodhran beats and low strings are featured throughout. It includes many upbeat Irish dance tunes to get your toes tapping, wonderful folk marches and waltzes that shows the band's impressive classical and Celtic training, and some of the most haunting Irish airs you have heard.”

The album is available internationally on iTunes, and Amazon.