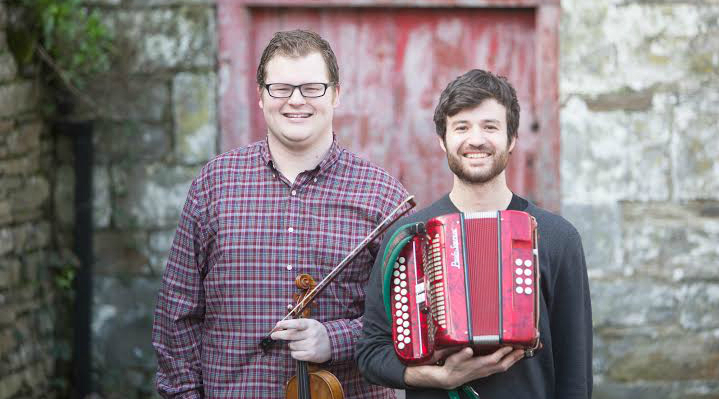 We have covered New York musicians quite a bit on Tradconnect over the years and two of the newer kids on the block are Dan Gurney and Dylan Foley.  They will be in Dublin for a concert in St David’s Church in North County Dublin on April 30th this year. Both are also members of The Yanks, a quartet that also features Isaac Alderson and Sean Earnest. In addition to their group work they have both released solo albums as well as a duet album last year. That was called Irish Music from the Hudson Valley and we launched it on the site in July 2015. You should check out our review here.

Its an outstanding recording and is a tribute to Father Charlie Coen and Mike McHale. Both emigrated to the US in the 50’s and found their way to the Catskill’s where they taught music to a young Foley and Gurney.

On their musical partnership and shared history Dan says “I’ve known Dylan Foley since he was 6 or 7.  I guess I would have been about 12.  So I knew him before he even played.  When we were growing up we went to listen to music at a place called The Radcliffe Hotel in upstate New York.  It was a concert series run by concertina player Father Charlie Coen.  He would have a concert on the 1st and 2nd Sunday of each month in this run down little hotel right on the Hudson river.  He would have Joanie Madden, Brian Conway, John Nolan and others.  A lot of people came up from the city and they would play a concert and have a few tunes afterwards.  So that’s where I grew up listening to this great music.  My parents heard about this concert series and started taking me there and I just got hooked on it.”

Both can now be heard on April 30th with the concert details included below.