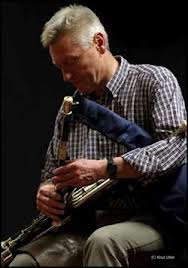 The final concerts in the excellent Steeple Sessions series take place this week at Dublin's Unitarian Church on St Stephens Green in Dublin.  On Tuesday 20th August you have Mick, Aoife, Ciara and Cormac O' Brien and on Thursday 22nd August Laurence Nugent and Fintan McManus take to the stage for the final concert.

Mick O'Brien is one of our best-loved uilleann pipers, performing regularly as a solo artist, with the RTÉ Concert Orchestra, and with the Norwegian groups Vamp, Hanne Krogh, and Secret Garden. His first solo album 'The May Morning Dew' (1996) was received with great critical acclaim, and his duo album with Caoimhín Ó Raghallaigh 'Kitty Lie Over' (2003) has since become a classic. He comes from a great Dublin musical family, and now his own children are fine performers in their own right. His daughter Aoife is lead fiddler with River Dance and is studying music in Leipzig in Switzerland. She has won almost every traditional and classical violin award in Ireland and various International awards. His son Cormac is an Uilleann Piper and Cellist and plays with the National Youth Orchestra as does his other daughter Ciara, a fine fiddler, harpist and classical violinist. Individually, they are in demand as performers in both classical and traditional circles and it is a very special and rare occasion to present them performing together as a family.

Chicago based Laurence Nugent carries on a great tradition of virtuoso flute and whistle playing that has graced Irish music on both sides of the Atlantic. As an established performer and recording artist on the Celtic music circuit, Laurence has performed with The Chieftains, Shane McGowan, Van Morrison, The Drovers, The Green Fields of America, Martin Hayes, Dennis Cahill and Paddy Keenan. His CDs (Laurence Nugent, Two For Two, and The Windy Gap, on Shanachie Records) have met with critical acclaim. Laurence Nugent comes from the little village of Lack in County Fermanagh, an area steeped in the traditional arts of music, singing and storytelling. Also from Co. Fermanagh is Fintan McManus who has played and performed with Laurence and many other well-known artists in Irish traditional music including Altan, Aly Bain, The Boys of the Lough, singer Len Graham with whom he recorded two well received CD's "Do me justice" and " Ye Lovers All" He has also worked with legendary Donegal fiddle player Tommy Peoples. He is a much sought after composer and his music has been covered on some 150 CD's worldwide. Fintan plays a variety of instruments including bouzouki, guitar and whistle and is much regarded for his sensitive accompaniment to music and songs alike