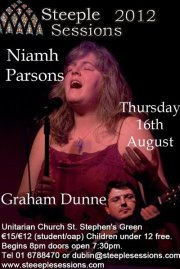 For those of you lucky enough to be in Dublin over the next couple of weeks you will have the pleasure of hearing one of the most distinctive voices in Irish music, Tradconnect member and singer Niamh Parsons. She will be performing as part of the Steeple Session concerts on Thursday 16th August. We had the pleasure of listening to her do a guest spot at a recent Paddy Keenan concert and even with a heavy flu she sounded great. Check her Tradconnect page here and listen to some sound clips, then book your ticket.

Described in the Boston Herald as both emotionally haunting and tonally as clear as crystal, Niamh's albums have been 'must-have' collector's items for any lover of songs and singing. Niamh has recorded six studio albums and one live album to date. For the last 10 years, Niamh has been playing in a duet with Ennis-based Graham Dunne—there is a spiritual bond between Niamh and Graham when they perform, which draws out the essence of the songs. "My father was a great singer, and on long journeys the family used to sing in the car—I don't remember a time in my life when I was not singing—I love songs."

Niamh developed this love into a penchant for collecting songs. She is always on the lookout for songs that speak to her—listening to new albums, scouring the Traditional Music Archives in Dublin, sharing notes with a network of friends and other singers. Once she discovers a song she likes, Niamh views herself as the vehicle for the music. "For me the song is more important than listening to my voice," she says. "I consider myself more a songstress than a singer—a carrier of tradition."

Throughout her career, Niamh has performed with a wide variety of artists, and has appeared at nearly every prestigious folk festival on either side of the Atlantic. As a member of the traditional Irish band Arcady (led by De Dannan's Johnny "Ringo" McDonagh), she sang on their Shanachie recording Many Happy Returns. She appeared before President Clinton and Irish Prime Minister Bertie Ahern in Capitol Hill, Washington, joined Grammy Award winner Paul Winter for an album and a summer concert in New York, and performed on "A Prairie Home Companion" when the show broadcast live from Dublin. Source : Niamh's Facebook Page