We are delighted to welcome all of the new Goitse enthusiasts to our newsletter and hope everyone that saw us perform in the last few weeks enjoyed the shows. Here is an insight into our experiences on our 12-day American tour.

We started the tour with the bad news that James “Banjo Barvey” Harvey was denied his US visa. James spent the last year completing his music teaching degree which meant that we had been working with some substitutes for our tours. After much brainstorming, jumping through hoops, contacting lawyers, the department of foreign affairs and even Conal’s local elected representatives, we still had no luck. So with no time to get a replacement, we flew out to our first festival near the famous Mayo Clinic in Rochester MN. Our bad luck continued as we downloaded the wrong maps for our GPS and had to travel the big scary roads of America using old fashion paper maps. The gig was great though and it was the perfect start to our brief stint as a 4-piece!

Next stop was La Crosse Irish Festival. We were thrilled to be asked back for a second year in a row. Casey Stephens and the whole crew at La Crosse definitely know how to party as well as look after their musicians. We had a pleasant surprise visit from a band friend and great person Chris McCarthy Zart. We had a blast hanging out with her as well as with our close friends from the band Full Set. You might have seen photos on our Facebook page of Áine and our friend Eamonn sporting certain tattoos!

From there we went to Drea’s pub, a pretty remote spot, but a venue with a wild atmosphere. At one stage a massive conga line formed and we ended up playing two encores. The crowd was crazy! After the gig we felt we had become part of their community and those types of places always become a favourite of the band. Speaking of favourite spots, we also got to play a house concert at Kathy Brown’s. Herself and Maryann Keifer are who we call our Mammies away from home! That speaks for how much we adore them!

Last on the US touring schedule was performing at Milwaukee Irish fest. Ryan Murphy of Manran joined us on flute for the weekend and we also had Jared Herman with us on sound! Having the band back to five members and then having Jared pump out our sound around the festival was a great feeling! We can’t thank them enough for the weekend’s work. We had 3 amazing gigs over the weekend on the Miller Lite stage and for the last gig we were joined by legendary sean nós dancers Emma O’Suillivan and Brian Cunnigham. Always best to finish with a bang!

The biggest performance was to follow that night. We were asked to lead the “Scattering” at the end of the festival. This is where all of the musicians perform at once on one stage to close out the festival. As you can imagine, the crowds were massive (see the picture below) so we were extremely proud of our own Colm Phelan who was given the job of M.C. for the night. He had the crowd clapping, screaming, on their knees and up again, doing Mexican Waves, fist pumping the air and most importantly just enjoying themselves. The buzz and excitement of the evening marks it as one of the most thrilling musical experiences we have had as a band. So a huge thanks to Ed Ward, Barry Stapleton and Patrick Boyle for having faith in us to pull off the performance. What a way to end any tour!

We were only home a total of 19 hours before taking off for France. Jet lag had definitely kicked in, but our delight in having James back with us helped us quickly forget that. We performed at the La Tatihou festival to a sold out crowd of over 1200. This beautiful island had made for the most ideal next stop. It’s a pity we didn’t have more time out there.

Next up for us is Germany this weekend where we perform at Glachau Irish Fest! There’s so much more to share with all of you  but this newsletter is already jam-packed so stay tuned for the next 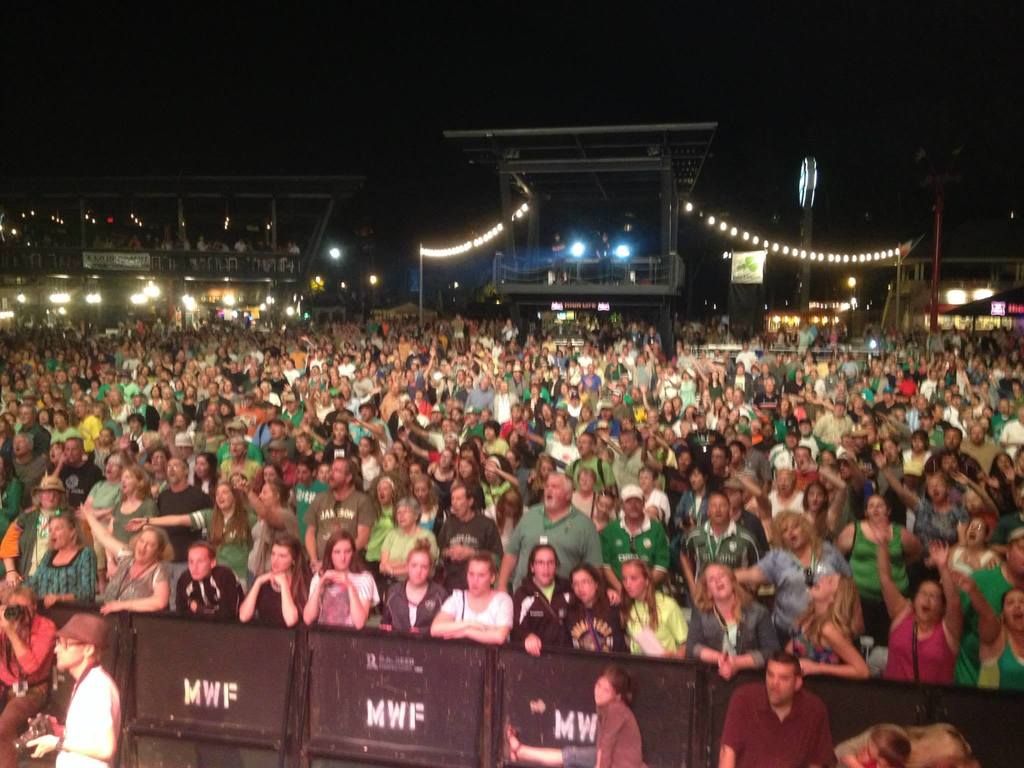