BIG day in the life of Lúnasa!!!  We’ve just set sail for the Caribbean on JOANIE MADDEN’S FOLK ‘N IRISH CRUISE, we’re getting ready to celebrate our 21st Birthday and most importantly we’re launching our NEW ALBUM ‘CAS’!!!

“Cas” represents a whole new dimension for Lúnasa as we feature the incredible singing talents of Natalie Merchant, Mary Chapin Carpenter, Tim O’Brien, Eric Bibb and Daoirí Farrell. These artists who hail from backgrounds of rock/bluegrass/blues/folk sit alongside sets of Lúnasa tunes, both original and traditional.

The cd will be officially released on Feb 22nd on our spring tour but from today we are taking pre-orders at www.lunasa.ie/shop

It’s been a long time in the works (8 years) but we’re so excited about and so proud of ‘CAS’. To celebrate 20 years on the road, we wanted to produce a special ‘one off’ recording that included a whole new dimension for the band. We’ve been so lucky over the years to perform with these amazing artists that have become firm friends also and the result is a very different yet distinctly Lúnasa album. We had been quietly recording over the past year and we can truly say it’s been worth the sometimes very tough logistics to get these very special guests recorded and onto the album.

Until March 1st, the album is available exclusively on the Lúnasa website and at our live concerts throughout Feb/March/April

Massive thanks to all that weighed in to make our Celtic Connections concert and our sell-out tour around the UK so special, so memorable and so packed!!!

What a way to kick start this anniversary year, the show with Mairtin O’Connor and Cara Dillon was especially poignant. 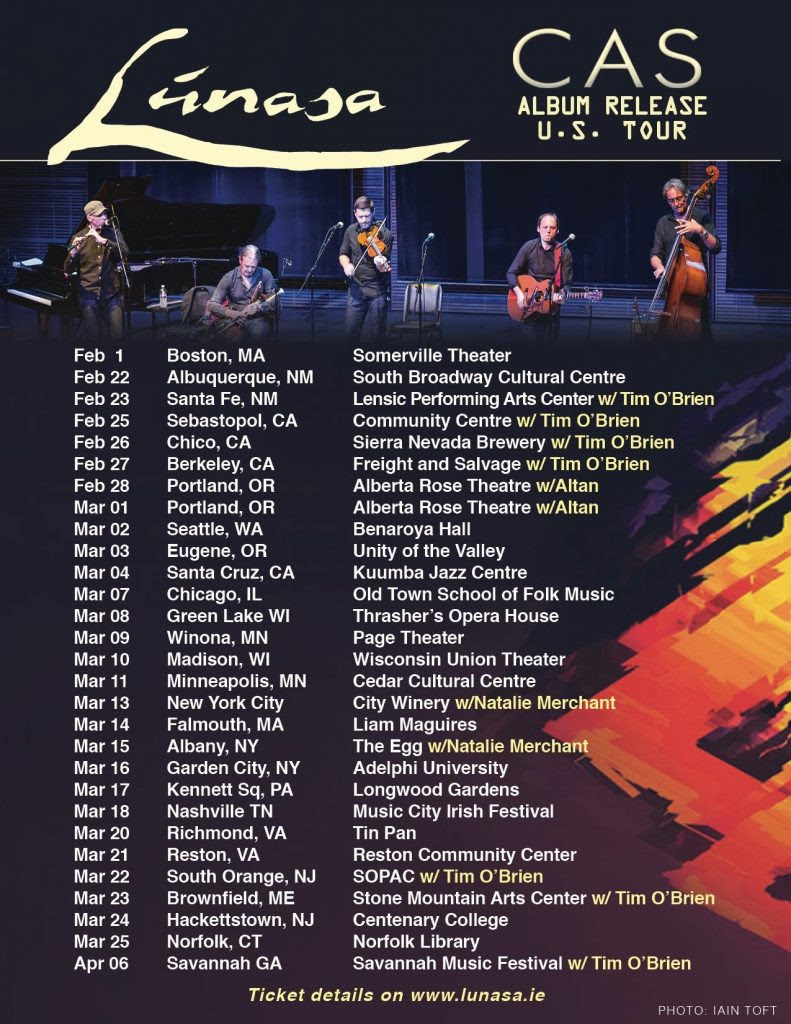