NYCB learned from the best 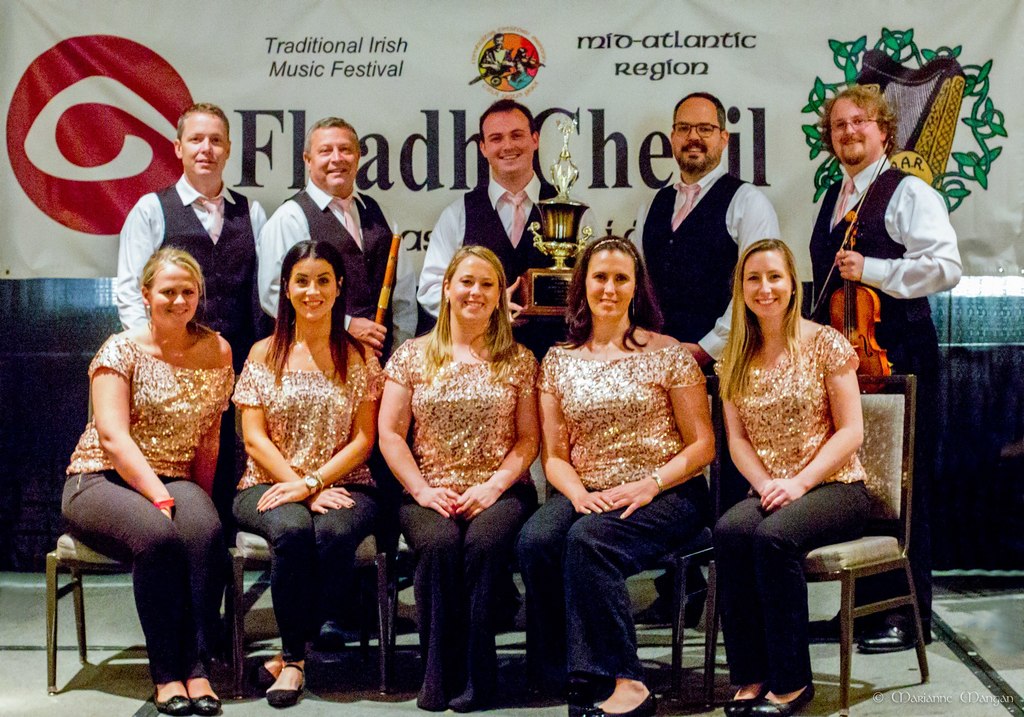 The Ennis-bound New York Céilí Band is inspired by the 1960 original.  Photo by Marianne Mangan.

In 1960, the New York Céilí Band, a legendary bunch that counted Paddy Reynolds, Andy McGann & Larry Redican (fiddles), Paddy O’Brien (accordion), Mike Dorney & Jack Coen (flutes), Gerry Wallace (piccolo), Felix Dolan (piano) and Chris Darcy (drums) among its members, competed in the All-Ireland Senior Céilí Band competition at the Fleadh Cheoil in Boyle, Co. Roscommon.  According to a 1961 article in the Advocate newspaper, the band that ultimately competed included O’Brien, Reynolds and Redican, Wallace, Dorney and Dolan, under the direction of Steve Quinn.  They went with the full support of New York’s Irish community and fairly electrified the crowd on the day with what the group called its “Ballinakill Sound.”  The absence of a drummer, however, proved to be a major liability with the judges and what could have been an All-Ireland first became a reported third-place finish.

Despite the result, the original New York Céilí Band set an important example and has inspired the many U.S.-based céilí bands that have competed in the All-Ireland since.  Over the years, several very strong bands have traveled over and there have been many notable successes.  Some readers may remember, for example, the Pearl River band, representing the Martin Mulvihill branch of Comhaltas, that won the Under 12 in 2012, or the Eire Og Céilí Band that won the Under 15 competition in Kilkenny City in 1984, or the Garrai Eoin II Céilí Band’s continual success in the under age categories in the late 1970s and ‘80s.  Others, still, may think back to the Joe Cooley Céilí Band, of the Maureen Glynn School, that took second at the Fleadh Cheoil at Listowel, Co. Kerry in 1986.  It remains the only other senior band from America to ever have placed in the senior competition.

This year, a céilí band will once again travel to Ireland to represent the Empire State in the senior competition.  Taking the name as a tribute to the original group and because New York is home to all its members, today’s New York Céilí Band is currently comprised of Isaac Alderson, MaryKate Carolan, Deirdre Corrigan (flutes), Erin Loughran, Katie Linnane, Eugene Bender (fiddles), Séagda Coyle (button accordion), your columnist Daniel Neely (banjo), KT Boyle (piano), and Michael Fee (drums).  This will be the NYCB’s second year competing in the All-Ireland.

The musicians are all familiar names in New York’s traditional music community, and have learned the music from some of the best the States have to offer.  Coyle, our group’s fearless leader, learned from John Nolan.  Corrigan was a student of original NYCB member Jack Coen but also had the opportunity to learn from Seamus Tansey.  Alderson, who grew up in Chicago, worked with Larry Nugent for several years, while Carolan learned from Margie Mulvihill.  Loughran, whose mother is Margie Mulvihill, comes from a very musical family, full of musicians and teachers.  Linnane learned from Willie Kelly, and Bender from Brian Conway (who himself learned from original NYCBer, Andy McGann).  I learned from Mick Moloney, and Fee, who was indeed a member of the Joe Cooley Senior Band in 1986 (and other All-Ireland underage céilí bands), learned music from Maureen Glynn and step dancing from Cyril McNiff.

What the group learned about performing from their teachers is evidenced by their outstanding success in competition, both on the regional level and in Ireland.  Coyle, Carolan, Fee, Linnane, and Bender have each won gold medals both on their respective instruments and in group settings at the Mid-Atlantic Regional Fleadh and have gone on to compete in Ireland.  Boyle, who plays with Cherish the Ladies, has won All-Scotland and All-Britain titles on piano and accordion.  Loughran, who is a seven time Mid-Atlantic Fiddle Champion, placed second in the All-Ireland Solo Fiddle and first in the Trios at the All-Ireland in Clonmel in 2004, while Alderson, who is a touring professional and plays with groups like the Yanks, Comas, and Runa, took All-Ireland Senior Championships on three instruments in Listowel in 2002.

Many in the group teach as well.  You’d find some, like Boyle, Alderson, Corrigan, and Fee, at the larger teaching weeks, like the Catskills Irish Arts Week.  I myself am just wrapping up a successful summer as the artistic coordinator at the Augusta Irish Week in Elkins, West Virginia.  Others have well established teaching practices in New York’s Irish community.  Coyle, for example, teaches out of the Woodlawn House of Irish Music and Dance and sees students five days a week.  Loughran, who runs the Erin Loughran School of Irish Music and Arts, with locations in the Bronx and Rockland County, has a TTCT and will teach at Scoil Éigse this year.  The results speak for themselves: working in cooperation with Coyle, Loughran has prepared Céilí Bands in the Under 12, Under 15, and Under 18 categories and a Groupa Cheoil in the Under 15.  The pair will bring over 50 children to Ennis to compete this year.

Inspired by New York’s rich musical heritage, the New York Céilí Band plays with a sense of drive, power, and lift that dancers enjoy. We plan to céilí-forth a fine program in Ennis, hopeful that the work we’ve put into the band will not just reflect the high standard of the original New York Céilí Band, but of all the other bands that have competed so well since. If you’re planning on heading over to Ennis and will attend the Senior Céilí Band Competition, give a cheer – we’ll be playing for you!