Welcome to the Tradconnect Official Album Launch Series.  For members and readers this series of articles will introduce you to a new traditional album for the first time. We are working with artists to bring a little bit more excitement to the “online launch”.  The first time you share a track from a new recording with your fans and audience is important, and we are delighted to be the first in highlighting these new releases.

Caitlín & Ciarán is the new duet album from Caitlín Nic Gabhann and Ciarán Ó Maonaigh.  The last time we encountered Caitlín on Tradconnect she won our album of the year award for her stunning concertina album, simply called Caitlín.  This time its a duet approach with fiddler Ciarán Ó Maonaigh, and the result is once again stunning.  “We've been playing together for a good few years and the decision to make an album together came quite naturally”  Caitín said when we spoke to her recently.  “We've developed a sort of 'common ground' where both our styles are comfortable and can be expressed freely. I don't think the music on the album is heavily Donegal or heavily my style.  It's a mix of both Donegal and Scottish tunes, including some compositions by Vincent Broderick, Tommy Peoples, and a few of my own, and of course some dancing!”

On the album they are joined on a number of tracks by guest musicians including Jack Talty on keyboards, Sean Óg Graham on guitar and Caoimhín Ó Fearghail on bouzouki.  As always we share a track and included below is the first one from the album. Mammy’s Plaidie and The Boyne Hunt were played together by John Doherty and subsequently by Tommy Peoples.  The last reel they learned from the late great Cape Breton fiddler, Jerry Holland. 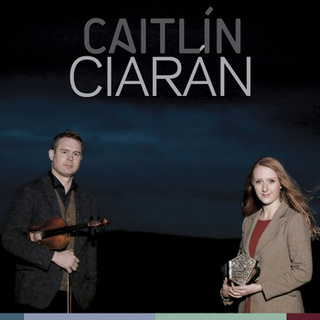 We asked Caitlín was it a different experience making this recording and has her music changed or altered much since her award winning solo recording.  “Making my solo CD was a whole learning experience, and I had to push myself to get out and play and talk into the microphone.  It was all very new and scary, but I definitely learned a lot and I think I gained some confidence from the whole experience.”

“The more you get out and play the more you learn just what your capabilities are. I also learned what the audience like to hear and see.  Ciaran has a lot of experience playing on stage and bringing out CDs so it was great to have him as part of this production. I don't think my music has changed much in overall terms.  I try to hold on to the rhythm and pulse that connects the music and the dance, in both my music and dancing!”

The album can now be Downloaded by clicking on the icon below.

Caitlín & Ciarán are also on tour and you can find out more by visiting their website www.caitlin.ie