Draíocht Na Feadóige, is the debut recording by Neansaí Ní Choisdealbha.  Her name and traditional music go hand in hand as a result of her outstanding work with RTÉ Raidió na Gaeltachta.  Neansaí presents three, two hour programmes on Tuesday, Wednesday & Thursday called "Ceol Binn ó na Beanna" on RTÉ RnaG as well as the Sunday morning show.  She also presents a section of the Thursday programme "Mol an Óige" for young traditional musicians.  Neansaí herself was part of the team that copied and digitized the stations archival material many years ago and her work and support of traditional music in this country has been significant.

For this recording she has teamed up with Cló lar-Chonnacht who once again have produced a superb product, not only with regard to the music, but also with the packaging and presentation.  Included is a 24 page booklet giving a detailed biography and extensive notes on all the tunes.  It really takes you back to the days when the album sleeve held as much interest as the record within.  As regards the music, Neansaí has taken the bold step of including 21 tracks of music.  This is effectively a double album with great variety throughout.

As always with these launches we present an exclusive track and included below are the reels John Dwyer’s/Silver Spear.  Neansaí heard these two reels from flute player Marcus Ó hIarnáin who was the first person that she ever saw playing the flute.  John Dwyer, one of the musical Dwyer family from Castletownbere in Cork, composed the first of these reels and the second is a great standard that is played in nearly every session. She is joined by Jack Talty on piano, Eoin O’ Neill on bouzouki and Paddy Ó Fiannachta on bodhrán. 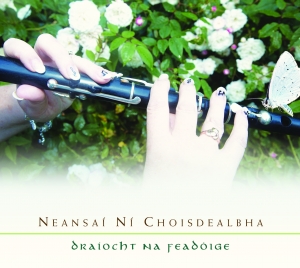 There is a certain skill required when you release an album with 21 tracks.  Significant variety is required to hold the listener’s attention and Neansaí balances this perfectly.  It’s something that you look for with every album, and we spoke to Neansaí about this.

She said “I knew from the start of recording that I wanted a final recording that would flow from start to finish without getting monotonous or repetitive to the ear, so I approached the recording much the same as I would my radio programmes - variety of tempos, sound and instruments to get as much variety as possible and keep the listener interested from start to finish.  This thought was always at the back of my mind but at the same time it did not interfere or become the reason to record any particular track.”

“I did not intend to have 21 tracks when I started out” she says.  “In fact when I started recording I would have been fairly happy with 14 /16 tracks and I suppose 18 was my target.  At the end of some recording sessions I did some "off the cuff" tracks just to see how they would sound and really did not think they would make it to the CD but Deirdre Ní Thuathail of Cló Iar-Chonnacht said if they were recorded and if I was happy with them I might as well use them all so that is how it came about.”

The CD was launched at the Connemara Sea Week earlier in the month.  She will follow this up with a launch at the Return to Camden Festival in London on Sunday 26th October and she hopes to have a launch in Dublin's Cobblestone at some stage. Looking further ahead in early 2015 she will also be doing a concert at "Bewleys ag 6", Bewleys, Grafton Street.  This has been set for February 24th 2015.

Finally if any young musician would like to feature on the “Mol an Óige” programme referenced above they can email Neansaí at ceolbinn@rte.ie.