Current Affairs is the latest release from Philadelphia based RUNA.  Band members include vocalist and step-dancer, Shannon Lambert-Ryan of Philadelphia, Dublin-born guitarist, Fionán de Barra, Cheryl Prashker of Canada on percussion, Dave Curley on mandolin, vocals, bodhrán, and step-dancing, and Maggie Estes of Kentucky on the fiddle.   They describe their sound as Irish-American roots and say they draw “equal inspiration from both the deep and ancient roots of the Celtic tradition and the modern reality of the Irish in America”.  Within this they incorporate traces of bluegrass, soul and even pop with a traditional Scots-Gaelic lullaby like Aoidh, Na Déan Cadal Idir sitting comfortably alongside Black River by Amos Lee.  Covering this range of emotion and expression is no easy task and the voices of Shannon-Lambert-Ryan and Dave Curley handle the challenge with consummate ease.  As a group RUNA offer a more vocal driven offering with less in the way of solo instrumental tracks.  The song choices are therefore strong with some exceptionally good arrangements.   Guest musicians include Ron Block (Alison Krauss & Union Station), harmonica player Buddy Greene (Billy Gaither) and accordionist Jeff Taylor (Elvis Costello).

As always we include the very first listen to a track from the album and included below is Ain’t No Grave. It’s a gospel song by Claude Ely that has been covered by artists like Johnny Cash and Norah Jones.  RUNA were intrigued by its message of the power of belief  and its inspiration to overcome life’s trials. 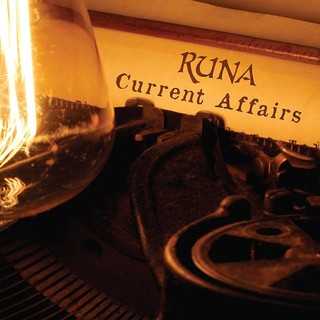 We spoke to RUNA  in advance of this launch about the song selection and their favourite tracks.  “On this album, in particular,” they say, “we were incorporating several varying influences into our arrangements. We really wanted to try something outside of the box with the songs and push our boundaries as a band.  Of all of the tracks on the album, I think that we are really happy with how "The Wife of Usher's Well", "Ain't No Grave", and "The False Knight Upon the Road" turned out in the end.  I think we all tried at least one thing that was a little out of our comfort zone on this album, and it was all the more rewarding for it!"

We asked about the development of their unique sound and the strength of the vocals on the album.  Shannon Lambert-Ryan leads in this regard with Dave Curley adding one track.  They say that while they play both songs and tunes in all of their sets and on their albums, they are primarily a songs-based band.

“Much of the music that we play stems from stories that have been passed down through the centuries and we are a vehicle for those tales.  We like to explore the colours and emotions within each of those stories with different instrumentation and arrangements.  The more colourful the story, the more intricate the instrumentation tends to be for a given song, and we like to highlight the virtuosic playing of the instrumentalists in the band throughout all of the songs.  We feel that the instruments and the vocals are equally important to illustrating the stories, so, we try to showcase both of them in all of our arrangements.”

The album will be launched at a special concert on Friday 20th June 2014, at The Sellersville Theatre, in Sellersville, Bucks County at 8pm.

We, especially, like the whistles on "The False Knight Upon the Road"! :)

Congratulations on the album guys! It sounds great!