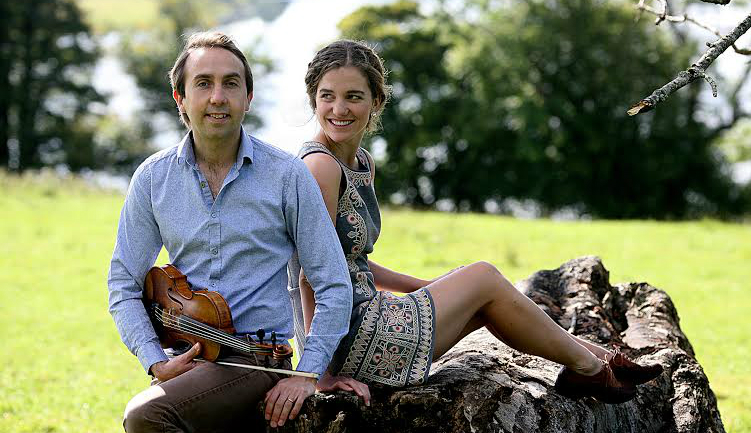 The Green Branch is the new album release by Sligo fiddler Oisín Mac Diarmada. On it he explores a wide repertoire of fiddle material accompanied by the piano of Samantha Harvey. He describes it as “the hallmark sound of so many classic recordings of Sligo fiddlers” and across 14 tracks he demonstrates just why he is regarded as one of this island’s finest musicians.

He is the founder of leading traditional group Téada, with whom he has toured extensively throughout the world since 2001. Oisín’s solo performances have seen him play at specialist music festivals such as Masters of Tradition in West Cork, accompanying former Irish President Mary McAleese on a State visit to Romania and a guest solo appearance performing Charlie Lennon’s Island Wedding suite with the Southern Georgia Symphony Orchestra in the US. He has toured frequently in recent years with noted singer/accordion-player Séamus Begley, with whom he has released 2 duo albums. Most recently Oisín worked in a presenting role in The Sligo Masters documentary broadcast on TG4, which explored the fascinating story of 3 master Sligo fiddlers who emigrated to the US in the early 20th century.

Included below is Track 3 from the album, featuring the reels The Avonmore and All Hands Around. Both reels are published in the 1903 O’Neill’s Music of Ireland and the first reel appeared under the title ‘The Blackwater’ in Ryan’s Mammoth Collection of 1883. Sligo fiddler Michael Gorman recorded ‘The Avonmore’ with Margaret Barry for Reg Hall & Bill Leader in London during 1968.

On tune selection he says that "various aspects of the Sligo tradition are represented on this album, from the reel Miss Monaghan's recorded by Michael Coleman in 1922, a 4-part version of The Mountain Road reel composed by Sligo fiddler Michael Gorman, a composition of Sligo flute player Jackie Coleman, and a selection of tunes I composed for a commemorative James Morrison concert held during Fleadh 2015 in Sligo. Tunes composed by Charlie Lennon feature strongly also, including a beautiful reel that Charlie composed in honour of Leitrim/New York fiddler Vincent Harrison. Tunes written by other fiddlers are always particularly exciting to interpret so I really enjoyed including tunes composed by fiddlers Séamus Connolly, James Kelly, Seán Ryan, Ed Reavy and Johnny McGreevy on the recording also. With the sparse texture of fiddle and piano, I hope the real beauty of these melodies is captured in some way on the album."

Oisín also feels that the pairing of fiddle and piano is a trademark sound of the 1920s/30s-era Sligo fiddlers, though not necessarily in a positive sense. He says that the last 100 years has seen piano accompaniment flourish within traditional music, finding a role in both large-scale ensemble céilí band formats and also in a more intimate role partnering a solo instrument such as fiddle. “I grew up listening to the beautiful melodic voicing of piano accompanists such as Charlie Lennon, adding interesting harmonic texture to the mesmerising fiddling of Frankie Gavin. I was a little older when I started listening in detail to the early 20th-century recordings, trying, as most listeners did, to hear beyond the sometimes frantic and unsettling accompaniment efforts. As the years have rolled along, it has been a joy to hear a growing number of wonderful piano accompanists digging deeper into the harmonic possibilities that underly our melodic tunes.”

He also feels that there is something “incredibly powerful about the harmonic presence of the piano and the rich textures that it provides, that seems to sit so comfortably alongside the sweet warm expression of a fiddle.” He says that it has been a “wonderful experience to record this album with Samantha, experimenting with tune keys to discover new life in old tunes and having fun with some of the harmonic accompaniment. Rather than seeing the texture as limited with just two instruments, we tried to focus on the possibilities within both instruments, which to some extent are a lifetime's work (and play!).”