Strictly within the tradition - Out of the Ashes by Matt Molloy, John Carty & Arty McGlynn 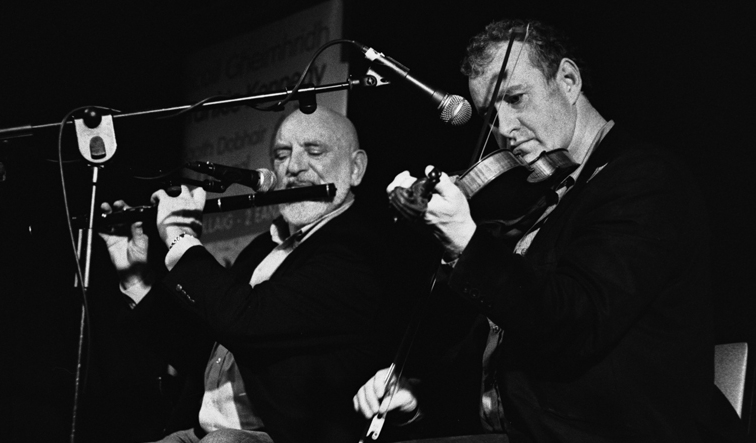 Do they really have to make it look so easy? So remarked one reviewer having just seen the trad superstar ensemble of Matt Molloy, John Carty and Arty McGlynn on stage. You can decide for yourself as the most exciting trad combination of recent times release their second album, Out of the Ashes featuring the flute and fiddle duet of Matt Molloy and John Carty accompanied by Arty McGlynn, Noel O’Grady and Brian McGrath. This their second album continues their musical journey through the landscape of North Connaught.

“We met at the pub by chance one winter's evening and over a few drinks we realised we had very similar musical tastes, particularly the music of previous generations from the locality.” This mutual interest led to some exciting music sessions and a number of shows and shortly afterwards they released their first recording Pathway to the Well.

“Over the intervening period we've searched our collective memory banks, old vinyl and session tapes which we recorded many years ago or were given to us for tunes and settings popular to the area. Some of this music is included in this our second album. Out of the Ashes is a title we got from a saying of the great Johnny Watt Henry who was a night owl and liked to keep musicians late into the night.  If they made an attempt to leave he would delay them by declaring ‘What hurry is on ye lads? Hold on and I’ll rake up the gríosach here and see if I can't pull another 'quare' tune out of the ashes for ye...to be bringing home with ye”.

This is the first track from the album. “The first reel is the McDonagh brothers' version of the tune also known as The Prohibition. The second reel is a Sligo version of the Grand Spey which Matt learned from Tilly Finn, a fiddle player and sister of Fred Finn from Killavil, Co. Sligo. Billy Brocker's was a favourite of fiddle and flute duet Fred Finn and Peter Horan.”

“This is a salute if you like to the great men and women of the past who nurtured the tradition against all the odds,” they say in their introduction to the album.

Matt Molloy is a native of Ballaghaderreen in County Roscommon – the mecca of traditional Irish flute playing. Considered by many as the greatest flute player of our time, Matt over the years has been a member of The Bothy Band, Planxty and The Chieftains and he has single handedly brought flute playing to a new level. Born in London, John Carty has established himself among the elite of Irish traditional musicians. With a plethora of music recordings in various guises under his belt, John Carty’s musical prowess has grown to great heights. He is also a member of the bands The John Carty Festival band, At the Racket and Patrick Street. Most recently John arranged (and played in) all the traditional music elements in the film Brooklyn.

Both Matt and John are recipients of the prestigious TG4 Musician of the year Award. They are delighted to be joined by three of Ireland’s top accompanists: guitar player, Arty McGlynn, piano player Brian McGrath and bouzouki player, Noel O'Grady. Their subtle and imaginative  playing is the perfect accompaniment to Matt and John’s unique duet.

Both Matt and John play strictly within the tradition, yet when playing together both are exhilarated by the boundlessness of each other's playing.  But the music is more than that too - more than simply the sum of two players.

“A third element comes in there….it resolves into something else,” says Matt. “Something that comes about when two players are wired into each other and working intently with the music. It makes you feel good for days. It will make the listener feel good for days too.”