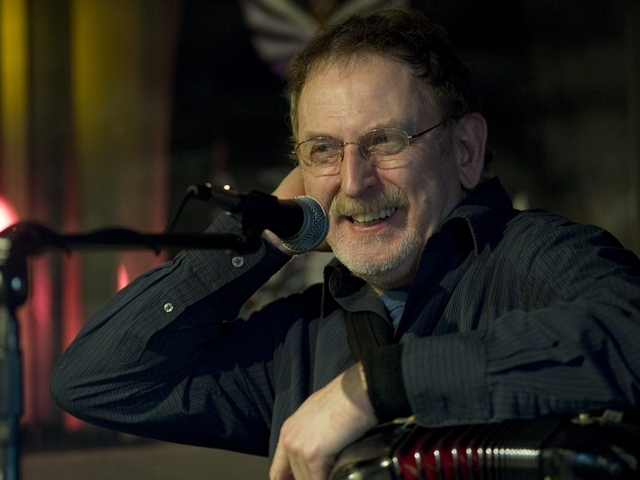 Paddy O' Brien is a musician with a mission. He is presently undertaking a Kickstarter Campaign to complete the third part of his tune collection. It’s described as A Personal Treasury of Irish Traditional Music and is an historic compilation of melodies from his considerable life in music. Volume One was published back in 1995 and included 500 jigs and reels. In 2011 he followed up with Volume Two, which included another 500 tunes—double jigs, slip jigs, reels, hornpipes, and polkas. This Kickstarter is for Volume Three and it will include some unusual jigs and reels, plus walking marches, slides, set dances, and harp tunes. This collection will be available in MP3 format as well as CD’s, book etc. So how did this all begin I wondered? Did it start with an album and then slowly get out of hand? Our interest was piqued so we had to catch up with Paddy to see how such a mammoth task began, and how he manages to remember such a volume of tunes. To put it into context, it must be a world record for one individual to record up to 1,500 tunes from memory.

“When I started the project (around 1993), I was thinking it would be kind of tragic if I began to forget the tunes in my repertoire as I got older” he explains. “I don’t read notated music, which means that I rely on memory to keep all the tunes in my head. So I began thinking about setting down 500 tunes—that seemed like a good round number. The first group of tunes included 400 reels and 100 double jigs. I recorded them in the spare room of our house, on a big reel-to-reel deck that I borrowed from the Folklife Center at the Library of Congress in Washington, D.C.”

Completing this initial task came at a price with his biggest problem being that he had to take time away from touring to devote himself to the research and writing and most of all practice to complete a project like this. “It took a couple of years to complete the recording, then another few months for mastering, and the tunes were finally made available in 1995 on cassette tapes. We then re-mastered them and made the recordings available on CD in 2003.” Paddy explains that it was around 2004 that the project kicked off again and he started thinking about recording the second volume. It presented some new challenges. “Volume Two was even more involved,” he says. “It included lots of different types of tunes—double jigs, reels, hornpipes, polkas, and slip jigs. Many of the tunes I had played and known in my head for years, but I had to practice and get them into shape for recording, so the process took quite a bit longer than the first 500. Recording technology had developed a bit at that stage as well, so I was working with a digital recorder borrowed from a friend, recording on DAT tapes. Volume Two came out on CD in 2011. And then we made Volumes One and Two available via digital download in January 2013.”

What is also remarkable about this project is the fact that it did not stop at 500 and Paddy has continued onwards and upwards. When Volume 3 is complete the total will stand at 1,500. This is an unimaginable undertaking that you would deem outside the reach of a single musician. You can listen to samples of all of these tunes on CDBaby where they can be purchased individually or on individual disks consisting of 30 plus tunes each. The disks are also collated by tune type so if you want to brush up on your hornpipes you can get a complete hornpipe disk. Tempo is moderate and suitable for play along if required. It is also not aimed solely at accordion players. The importance of learning music by ear cannot be overstated and every musician learning this tradition should devote a certain percentage of their time to learning some tunes by ear.

As we speak Paddy is about three quarters of the way through recordings for Volume Three, which will include another 500 tunes: more double jigs and reels, as well as slip jigs and hop jigs, set dances, clan marches, harp tunes, and slow airs.

“I hope the variety of tunes will be appealing to people,” he says. “I have lots of nice versions and settings of tunes that I got from a variety of solo performers over the years—people I used to hear on the radio, and people I got to know over the years, traveling around Ireland and playing music. Some of my own compositions are in there as well. I give all the background on the tunes, the titles and where they came from in booklets that go along with the recordings. And even though I play the accordion, I play the tunes the way I heard them from fiddlers and flute players and pipers, etc., so the tunes are not just for accordion players—they’re really suitable for people who play any sort of instrument.”

Paddy is not sure how he is able to remember tunes. He has always had a good memory for notes and for the variations that different players put into the music. He also tends to remember the occasion on which he got a tune, as well as the particular person he learned it from, and somehow that helps him remember the tune itself. We ask is there a danger that he may be ever so slightly altering the tunes.

“As far as altering tunes is concerned, I don’t really set out to do it. You enter the core of the melody, and hunt for ways—and sometimes it’s only one note—to put more feeling and expression into the tune. Sometimes there are note patterns that are a little out of context with a certain part of the melody. So to eliminate what I call a ‘blandness,’ a melodic blandness in some note patterns, or perhaps even something that’s too repetitive, I would search to find a way to make it more melodically pleasing. It happens in the midst of playing. Sometimes I would stumble upon a nice note that would give new life and energy to the tune, and I would install it, and keep it there. Any small variations I put in are based on instinct for enhancing a melody. It’s all part of the evolution of the music. At the same time, you have to stay within the traditional framework of the melody.”

Beyond this project we get to talking about the music scene in the US and if it has changed much over the last 20 years or so. “It hasn’t changed too much in the US, at least in the circles I travel in,” he says. “On the non-commercial front, the passion for playing and learning Irish traditional music in the US is even stronger than it was twenty years ago. With festivals and workshops and the internet, it seems as if traditional musicians are better able to communicate and keep in touch about the music than they were twenty years ago. There are loads of people who play for their own enjoyment, and that’s very healthy, I think.”

There is a constant stream of comment on the ability of musicians to make a living playing music. The impact of the internet both good and bad, streaming channels like Spotify and the damage that they are doing to smaller artists that do not fall under major labels. Paddy feels “the whole concept of commercialism is detrimental to the soul of Irish traditional music. It lures professional musicians to attempt all sorts of extremes and gimmicks in their presentation, and puts pressure on them as well. I think musicians in the US are more conscious of pleasing audiences than the musicians of my generation and the older generation in Ireland ever were. There’s a big difference between someone like me, raised in a thatched house, growing up in the country, and someone raised in a place where there’s the sound of street traffic all around. It molds your feeling for things, the sound of the country with the birds and the weather, and the simplicity of the life. Everybody’s gotten so educated now that simplicity has been taken out of the soul of so much that goes on.” He goes on to say that “all the choices of the modern musical world don’t give young people the opportunity to experience one tune, and have the pleasure of learning it and playing it over and over. The pace of living doesn’t allow them to concentrate on just a few tunes and to bring those tunes closer to their hearts. They’re drowning in excess. Learning a tune is more involved than people think. Years after thinking you know a tune you realize that you only had the bones of it. That kind of realization only comes from long-term experience.”

We close out by asking him if there is still an emotional draw to Ireland and if he would ever retire here. “I miss the pace of life in Ireland,” he says. “This country puts enormous financial pressure on people, and that kind of pressure doesn’t seem to exist on the same scale in Ireland. As a musician, I can’t foresee myself retiring from anything!”

This Kickstarter campaign is critical to getting this project completed. Kickstarter and similar platforms offer great advantages to artists like Paddy. Earning a living by playing traditional music is as we know a difficult task. What Kickstarter does is provide prefunding for an album or project. By supporting the artist you are simply purchasing the album or recording in advance of it being made. This takes the financial risk out of the project and allows for the development and execution of artistic projects. Remember that it is not a charity. You can pledge from $10 up to $225. In exchange for each pledge amount you receive various products starting with a digital download for an album and rising to multiple downloads, books, other albums etc.

This Kickstarter campaign runs until 30th November 2013. At the time of publishing this project is 95% funded and it will end on 30th November. To support Paddy visit Kickstarter