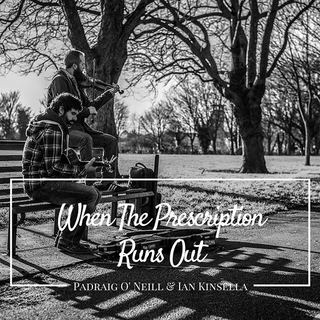 Kiss Me Kate by Padraig O’Neill and Ian Kinsella is our track of the week, having received over 200 plays on our Soundcloud file. It is taken from their new album called When the Prescription Runs Out which we launched last week.

Padraig explains that some of the tracks were spontaneously arranged in the studio, some involved a bit more thought, and others were a product of their live sets. "The first track Man on the Hunt is a combination of all three" he said. "I wanted to play the first tune slow initially and to then move up to the faster, more energetic pace we adopt in our live shows.

The night before recording Ian came up with some simple harmony arpeggios that worked well and allowed for this slow introduction. Kiss me Kate was developed with a similar approach. The guitar backing was developed while recording the track as Ian didn't want to use a plectrum on every track, or kill the tune with too much arranging, which can often be the case.”

“When The Prescription Runs Out’  is now available on iTunes and Google Play. Contact Padraig on his Facebook Page for physical copies.