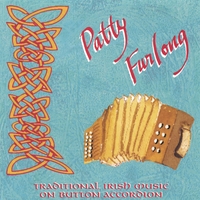 Reviewing an album such as this, many years after it's release gets me thinking about the timeless nature of traditional Irish music and the need for albums like this to be highlighted or possibly re-released. Maybe others are aware of this album but for me discovering something as special as this, no matter what the release date is always worth it.  Patty Furlong has indeed created an album of note and her  fluid and effortless accordion playing style should be an inspiration to all. The album has a great opener in a tune called Tumbledown composed by James O' Grady a piper and fiddle player from Luton, England. It's a modern enough tune that works very well and is followed by White Petticoat to complete a great set of jigs and a great opener to the album. From there we have a set of reels called Breda Stubbert's/The North Side/Alice's, the latter being a Frankie Gavin composition.

Patty Furlong stands out as one of the cream of the bumper crop of Bronx Irish musicians. Her late father Jimmy Conway got her started on his old Baldoni Box before she received a bright red Paolo Soprani accordion of her own . Martin Mulvihill then took her in hand and helped Patty develop the skills and style that won her three All-Ireland titles.

There are some great tune choices throughout including The Blue Eyed Rascal, a set dance that towards the end includes the sound of a dancer stepping it out. Strangely enough it works. Other well know sets are a treat as well including the Man of The House/Kieran Kelly's/Brendan McMahon's and the Killavil / Paddy Fahy's. Hornpipes, polka's and a beautifully delivered Scottish air paired with an Irish jig, as suggested by Jackie Daly called Snow Capped Mountain/Mist Covered Mountain are also delivered in great style.

What can you say about the music? It's rock steady traditional accordion playing of the highest order. There is an overriding clarity to the playing and the ornamentation that is used throughout. For any budding button accordion player you would be well advised to have this in your collection. It is played at a leisurely pace and shows a musician well in control of the music and it's delivery. The accompaniment is perfect insomuch as it never overpowers the accordion and this adds to the clarity of the listening experience. With Zan McLeod on guitar and bouzouki and also in the producers chair, the recording and production was always in good hands.

Discovering this makes me wonder what other gems there are out there that I haven't yet discovered.