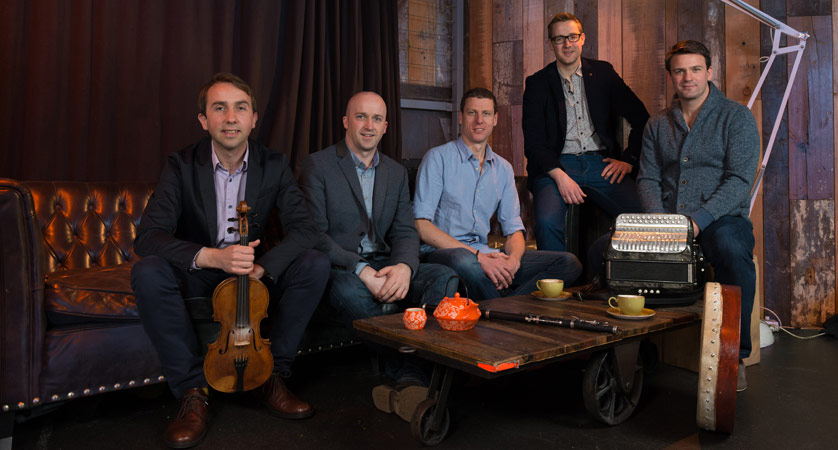 One of Ireland’s most celebrated and respected traditional composers Peadar Ó Riada (son of Seán Ó Riada of Mise Éire fame and founder of Cór Chúil Aodha) will present the world premiere of his new work, ONÓIR at the National Concert Hall on Sunday 30th October 2016 at 8pm.

A special commission by Gael Linn as part of the 1916 commemoration with assistance from The Arts Council, ONÓIR (which translates as honourfrom middle-Irish, old French and Latin) tells of how Ireland’s multi-layered identity evolved over time. It conjures up the primal consciousness of the Irish and encompasses the mythology of Ireland, its monastic tradition and the major historical events which have shaped us as a nation.

This piece, alongside other new works (for choir and musicians) designed to look at Ireland’s past and future, will be performed by one of Ireland’s finest traditional music groups Téada (comprising fiddler Oisín MacDiarmada, Tristan Rosenstock, Seán McElwain, Damien Stenson and Paul Finn) together with renowned uillean piper Mick O'Brien and award-winning harpist Oisín Morrison, Cór Chúil Aodha and Cór Ban Chúil Aodha.

Peadar Ó Riada:
"I have always been interested in the poetry of our heroes. It is a window into their distilled thoughts and feelings. My first ever composition was as an idealistic teenager and was based on a poem by Douglas Hyde concerning the beauty of bees, their song and work. But Patrick Pearse has held a special place for me and of all his poems, Móra Duit, a Thír ár nDúchais shows in 4 verses what “Tír Ghrá” means. I found in his poem something that moved me greatly and I have tried, hopefully, in a humble and simple way, to help it to sing.”

Based in the Gaeltacht region of Muskerry in Co. Cork, Cór Chúil Aodha, founded by Seán Ó Riada in 1964, occupies a legendary place in Irish music. The all-male voice choir who are best-known for their rendition of ‘Mo Ghile Mear’ celebrated their 50th anniversary in 2014. They continue their tradition of singing every Sunday in the local church, under the direction of Peadar Ó Riada.

Peadar is one of Ireland’s leading composers, directors and performers. His compositions include major choral works for his two choirs and smaller compositions for traditional instruments. He plays in several groups, including Triúr and Drole. He is also a broadcaster and has a weekly radio programme which is running for some twenty years - ‘Cuireadh Chun Ceoil’ on RTÉ Raidió na Gaeltachta and is a regular contributor to arts programmes on radio and television.

ONÓIR is available on CD in music shops and will be available to purchase from The Music Box at the National Concert Hall on the night of the performance.

The NCH is located in Dublin City.