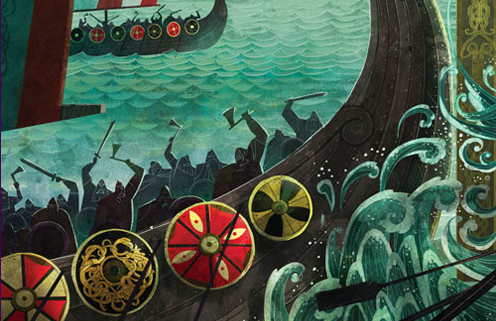 This weekend Lorcan Mac Mathúna will showcase his newest work with a free concert at the Chester Beatty Library in Dublin on Sunday, at 2pm.

The album is called The Arrows that Murder Sleep and it is a collection of songs taken from Celtic literature and mythology, composed over the course of the past seven years. The music was composed in reaction to lyrics from ancient manuscripts that date back to as far as the 8th Century -and many existed in oral traditions prior to that, according to Lorcan.

Here is a sample from the album with a footnote from Lorcan : “Easter Week 1014, Dublin. As Brian Boru gathered his forces to subdue the rebelling Leinster men, Sitrygg the Viking king of Dublin sent emissaries to his Norse allies from as far as Orkney and France, to come to Dublin on Good Friday to engage Brian in battle.”

For a further glimpse into Lorcan’s world you can also check out Preab Meadar which also came to us recently. On this collaboration with Daire Bracken, Lorcan said : “Preab meadarach is a metamorphosis from strict metre poetry into music. It is taking the complex metric rules of medieval Gaelic syllabic poetry and constructing compositional theory using the exact same metre."

While such a statement may in itself take some deconstructing, what it means to the listener that is willing to engage is quite different. Like The Arrow That Murder Sleep, it is a breathtaking break from the mainstream, and repeat listens, which are required, reveal a lot. Not because it is obscure, but because it is so creative. There is a definitive sense of freedom in exploring these tracks. It’s sparse, and layered with fiddle and voice in a dizzy array of harmony and raw fiddle accompaniment.

Expect more of the same on The Arrow That Murder Sleep this Sunday when he teams up with Martin Tourish, Eogan Neff, Seán MacErlaine and Daire Bracken. Here is another track called the River Roe.