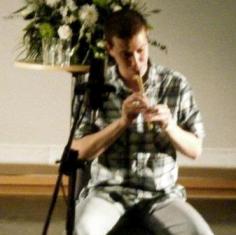 Enda Seery is currently a member of new ensemble ‘Thar an Uisce’ (Over the Water) and on the MA in Traditional Irish Music Performance course at the Irish World Academy of Music and Dance, Limerick, whistle fanatic and flute player Enda Seery hails from the heart of Ireland in Streamstown, Co. Westmeath a place well known from legendary button accordion player, the late John Joe Gannon. He was always going to partake in traditional Irish music, being the youngest of a very musical family with siblings Ciaran (button accordion), Padraig (fiddle, banjo) and Siobhan (flute, whistle) starting off the Seery musical legacy. Enda’s cousin Colin Nea from Castletown Geoghegan, Co. Westmeath and now residing in Kilfenora, Co. Clare is a double Senior All-Ireland button accordion champion.

From a young age, Enda won recognition at Fleadhanna Cheoil. As early as 1996, he achieved 3rd place at the u-12 Whistle All Ireland. There is a great story from the Seery household from a past Westmeath Fleadh where all family members won their respective solo competitions and the boot of the family car was literally laden down with trophies on the journey home! He has continued to achieve success at Provincial and All-Ireland level. He is twice Senior Leinster Whistle Champion (2009, 2011) and also in 2011 he achieved recognition for his composing skills with his hornpipe ‘Langton’s of Kilkenny’ achieving 3rd place in the ‘Newly Composed Dance Tunes’ at All Ireland level.

Enda released his debut album ‘The Winding Clock’ in 2010. The album features Enda on a variety of Whistles such as Sindt D, Eb, Susato C and Generation Bb. Enda adds his own piano backing to some tracks on the album and All Ireland champion Bodhran player Colin Hogg and talented Guitar player John Byrne provide the rest of the accompaniment. The album wouldn’t be complete without a guest appearance from the Seery family on track 6, a set of jigs. Enda has become a prolific composer of traditional Irish music and ‘The Winding Clock’ album includes seven of his own compositions, 5 jigs, 1 reel and a slow air. He includes a couple of his own tunes - such as the jig, that gave the album its title, and the air "Fonn an tSruthain" (Tune of the Streams), relating to his hometown -, blending perfectly in in the traditional surroundings of more or less familiar Irish tunes. (Tom Keller, Folkworld Online Magazine)

‘The Winding Clock’ album has received consistent airplay on Irish radio appearing on programmes with Martin Donohue, 'The Wind that Blows' and Paddy Ryan 'The Heather Breeze' (Shannonside), Pádraig O Dufaigh, 'Coppers and Brass' (Midlands 103), Néansaí Ní Choisdealbha (Ráidió na Gaeltachta), ‘The West Wind’ (Clare Fm) and 'The Crooked Road' with Noel Fahy on Tipperary Mid-west radio. The album has received airplay on European radio with appearances on 'Chemins de Terre' on Radio Rennes in France, 'Song from Ireland' on Radio Rijnwoude in Holland and 'Traditional Irish Music Show' with John Devine on Radio Verulam, England. ‘Each tune is paced perfectly with every note enunciated clearly which sets the bar for any budding whistle players to absorb and emulate' (Eileen McCabe, Irish Music Magazine)

He has been teaching Irish for the past six years and he teaches weekly whistle classes in his local Comhaltas branch of Castletown Geoghegan, Co. Westmeath. He is also the current Chairperson of the branch as well as being the PRO of Westmeath Comhaltas. Enda is Musical Director and plays whistles and flute as part of ‘Ceoltóirí an Mhuilinn’, the resident group of the new Comhaltas regional centre at Aras an Mhuilinn, Mullingar, Co. Westmeath. The group played on ‘Céili House’ on March 5th 2011 on RTE Radio 1 as part of the 60th anniversary celebrations of Comhaltas, founded in Mullingar in 1951.

At present, Enda is involved in a number of musical projects. Whilst studying and practicing the performance of traditional Irish music at the Irish World Academy, Limerick he has met with three other talented musicians to form ‘Thar an Uisce’ (Over the Water) a fresh new traditional ensemble/quartet. The group features Enda Seery on whistles, low whistle, flute, piano and vocals, Rachel McGeehan based in Limerick on fiddle, guitar and vocals, Joanna Hyde from Colorado, USA on fiddle and vocals and Alec Brown from Arkansas, USA on cello, flute and bodhran. Enda plays some occasional duet gigs with guitar and banjo player John Byrne from Mullingar, Co. Westmeath. Enda is again producing and playing at the summer season of Comhaltas ‘Seisiun’ shows at Aras an Mhuilinn, Mullingar in 2012 and he is currently preparing for the recording of his second solo album.

Enda is delighted to be a member of Tradconnect and he regularly updates us on his musical endeavors!