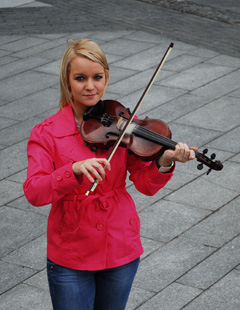 She didn't stop at that and continues to compete and win awards playing a wide range of instruments that include Piccolo and Saxophone. Other awards have also come her way including being best competitor in the Munster Fleadh, three years in a row, for 2003, 2004 & 2005. This is some achievement that not many musicians have attained and speaks volumes about the calibre of musician that we are dealing with.

Not happy to simply go it alone she has also won duet and group All-Ireland medals down the years. The Ciorras website state that she "has travelled all over the world dancing and playing music. Her touring has brought her to the Philippines, South Korea, the USA, Germany, Spain, Scotland. In 2005 she travelled with Comhaltas Ceolteoiri Éireann on the All-Britain Tour, and in 2007 she travelled to Beijing in China, also with Comhaltas."

In 2006 she competed and won the title of “Fiddler of Dooney” competition adding yet another top class award to her ever growing trophy cabinet. Little wonder then that she has toured so much or is in such demand.

This leads on to Ciorras who formed as a band in 2010 when the individual members were among a large number of young musicians who featured in the hit TG4 series, Lorg Lunny. The Ciorras website states that "As part of his journey around the country searching for young musical talent, these 8 young musicians, including Tara,  were invited by maestro Dónal Lunny to create a new band with a fresh, new unique sound in traditional music. Thus Ciorras was born, a young and innovative band centered around Dónal’s new percussion instrument ‘The Greadán’, creating a sound that is a hybrid of both new and old traditions.

They have " a diverse repertoire of newly composed tunes sitting comfortable alongside the more traditional repertoire and a selection of lesser-known songs. With an impressive assortment of instruments between them including fiddle, concertina, pipes, piano accordion, keyboards, percussion, low-whistles, voice and no less than 4 exceptional flute players, the possibilities are endless as demonstrated in their choice of repertoire woven among imaginative and original arrangements and played with an energy and enthusiasm that showcases the phenomenal playing ability and musicality of these outstanding young musicians."

Whatever Tara Breen's future holds it will no doubt be bright as talent like this will always naturally find a home in groups or duo's that will contribute in a major way to the tradition. Mainstream artists these days are finding new outlets in ensembles, groups, duo's as shown by our own Kevin Crawford's contribution both solo and as part of Teetotallers and Lúnasa. This keeps the music and musician very much alive and it would be a delight to see Tara Breen in new partnerships. For now though Ciorras will form a very important part of her immediate future and we look forward to what is to come. www.ciorras.com