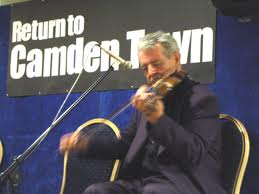 In case you missed it the Return To Camden Festival starts today.  It's looking like a very strong lineup indeed.  Camden Town is recognised in the traditional Irish music community as playing an important role in nurturing the tradition as many immigrants from Ireland came together in the local pubs to practice the traditional music of their homeland - the first time so many regional Irish styles had come together in such a setting.

There are still a healthy number of great traditional musicians, music followers, dancers, and singers in the City, including a succeeding generation that counts among it a large number of talented younger players.

The Return to Camden Town Festival has provided an excellent focus for purveyors and learners of the tradition and has sent a clear message that London is still on the map. It has also served to expose this wonderful tradition to London's wider multicultural population.

While most of the Festival is based at the London Irish Centre, expansion in the last few years has seen it incorporate a number of satellite venues in the area including Cecil Sharp House,The Shaw Theatre, Mazenod Centre, Luminaire and local pubs hosting sessions.

The following musicians have been announced so far but check their website www.returntocamden.org for more details.