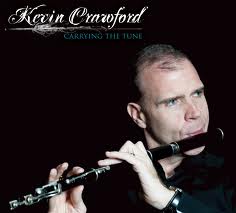 The virtuoso flute and whistle player Kevin Crawford has gifted us once again with a superb exposition of the finest in flute and tin whistle playing with his latest solo album ‘Carrying the Tune’.  His last solo album was entitled ‘D’ flute album (1994) so perhaps it is no coincidence that this latest album now features Eb, C and Bb flutes.

The album comprises 14 tracks, each containing lesser known tunes (the Hula Hoop reel anyone?) that now demand to be added to the common repertoire.  Reels, jigs, airs, horos (yes I said horos) and self-compositions make up the tracks.  For the most part the music is energetic, rhythmic and full of pace.  However with the tempo turned down we also get to be carried away with sensitive and haunting sounds such as in his whistle rendition of ‘The Dear Irish Boy’.

Crawford’s Grinter flutes purr like a cat, giving us a master class in tightly controlled phrasing, ornamentation and surgically delivered crans.  Although a predominantly flute album, it is the measure of the man that his whistle tracks are on equal basis in terms of musicality and technical genius.

Recording standards are also being pushed to new levels. On Slippery Slope a combination of double and treble tracking is used. On the first tune in the set he has double tracked a counter melody line on the flute which drops out for the second tune leaving room for the bodhrán to shine.  The third tune kicks in with three flute parts, one main melody flute and two harmony flute tracks basically playing thirds and fifths whilst sticking to the exact same phrasing as the melody line. Ingenious stuff and worth the cover price of the album alone.

Kevin is accompanied for the most part by John Doyle ( guitar/bouzouki ) whose steady and faithful rhythmic playing is a joy in itself. The accompaniment on Double Barrelled deserves repeated listens for its syncopated rhythms, again setting new standards.

Richard Sheehan emerges from the shadows!