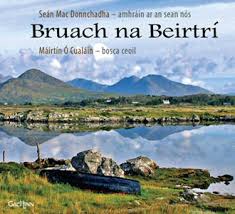 This is another re release from Gael-Linn. For people interested in traditional sean nós singing it features Seán Mac Donnchadha who is considered one of this countries finest singers.  Seán is a native of Carna in the Connemara Gaeltacht and he grew up in a rich musical culture. In the social life of the area he mixed with a host of legendary sean nós singers, including Colm Ó Cíodháin and Seosamh Ó hÉanaigh. At the Oireachtas fesitival in 1985, he won the highest accolade for sean nós singing, Corn Uí Riada. He has travelled extensively to sing at festivals and concerts at home and abroad and is heard regularly on RTÉ Raidió na Gaeltachta.  Song titles include Contae Mhaigh Eo, Johnny Seioge, Amárach Lá 'le Pádraig, and Baile an Róba.

Also included on the album are a number of tracks of unaccompanied accordion playing by the late Máirtin Ó Cualain from Carna.  He was likewise from a family steeped in the music.  Máirtin passed away in 2002 and, in his memory, his friends and family come together for a big session each November.  He play some well known tunes including Saddle The Pony, Swallow's Tail, Miss McCleod's and Drowsie Maggie.  This album was originally released in 1986 and is essentially an unaccompanied sean nós recording with 3 tracks of accordion music. For sean nós lovers it displays a recognised master of the art with all songs sung in Irish.
.
Purchase : www.gael-linn.ie