From the west of Ireland comes this exciting outfit with an all new music. Featuring 40 new compositions from Carl Hession. Available to buy on bandcamp (https://urnua.bandcamp.com/releases) 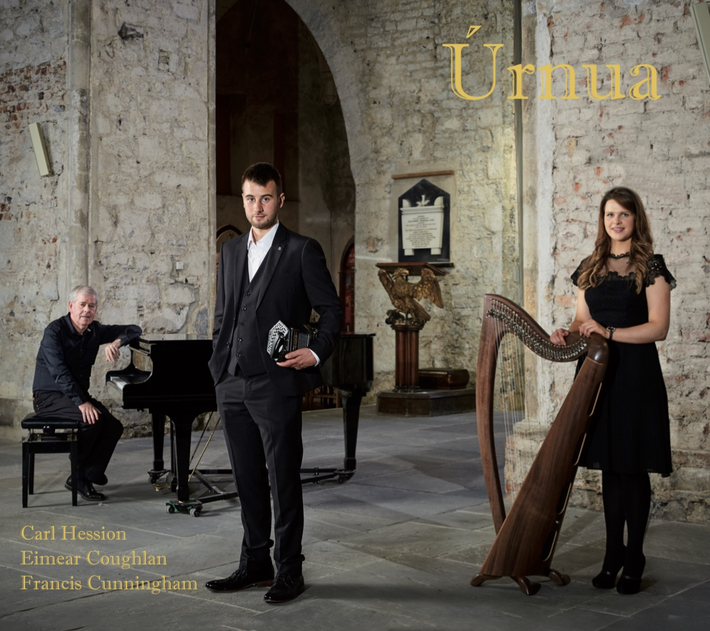 Carl Hession is regarded as one of the foremost piano accompanists and orchestral arrangers in Irish Music. This album showcases Carl as one of the finest composers in Irish Traditional Music. Carl is one of Ireland’s most sought after accompanists/arrangers, having cut his teeth in the legendary Irish band, Moving Cloud, also alongside Frankie Gavin is several outfits, currently Frankie’s Roaring 20’s outfit.

Eimear and Francis from Tulla and Crusheen in Co. Clare, have been playing music together since the age of 15. Also a fiddle player, Eimear learned her music from her grandfather Paddy Canny and studied the harp with Janet Harbison. West Limerick concertina player Tim Collins taught Francis from an early age. Individually and together they have won numerous accolades at various Fleadhanna over the past few years.

"I feel immensely proud and hugely fortunate to know Carl, Francis and Eimear as dear friends and outstanding musicians. Carl Hession is one of Ireland's most revered piano players, prolific composers and sought after musical arrangers. His work needs little or no introduction as his reputation is golden and has spanned the decades.

From a ridiculously early age Francis Cunningham and Eimear Coughlan have impressed me in every way imaginable. Musically, personally, socially and professionally their understanding, knowledge, respect, passion and overall grasp of the many layers and facets within our tradition is refreshing and quite remarkable.

Two of the finest exponents of concertina and harp with a strong emphasis on the Clare tradition in which they are steeped. I was so excited when I first got wind that Carl was collaborating with Francis and Eimear on a recording made up solely of Hession compositions. Stylistically and instrumentally they're a great fit and this gem of a recording is testimony to that. And the bloom of youth and the experienced Master making music across the generations."  Kevin Crawford