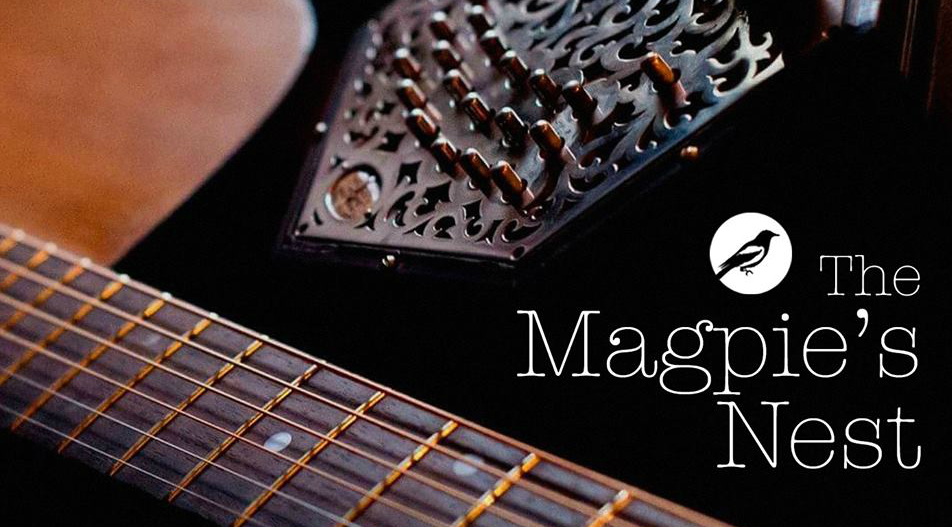 Welcome to Tradconnect’s Worldwide Album Launch Series. For these launches we are working with 110 radio broadcasters globally, making new traditional releases available for immediate free download through our Download Centre. For artists this makes an online launch a truly global event, with radio stations around the world gaining instant access to the album.

Our first official album launch of 2017 comes from Dublin duo Robin James Hurt and Ailbhe Nolan with a concertina and guitar album called "The Magpie’s Nest".

Robin James Hurt was born in Belfast, raised in Scotland and after many years in Dublin is currently living in Wexford. His considerable talents as a guitarist, composer and singer have seen him performing and recording as a solo act, as well as with many other artists, such as the late great Ronnie Drew of the Dubliners, Sinead O’Connor, Finbar Furey and many others.

Having already released an album and three EPs under his own name, as well as playing on albums by many other acts over the years, Robin's latest recording project is a collaboration with the virtuoso young Dublin concertina player Ailbhe Nolan.

Ailbhe Nolan has been playing concertina since childhood and is a Fleadh champion. Having been featured performing in concert on the popular RTE radio show “Ceilí House” as well as playing live regularly, Ailbhe began performing with Robin in 2014 and immediately the pair discovered a unique and notable musical chemistry.

After wowing audiences with live shows all across Ireland, Robin and Ailbhe have completed their first studio recordings, producing a collaborative album of traditional tunes and folk songs full of warmth, rich melody and passionate energy.

This is the opening track from the album and includes the hornpipes Galway Bay and The Golden Eagle. The album was recorded at Audioland Studios, County Kildare, “The Magpie's Nest” features a vibrant collection of trad tunes led by Ailbhe's distinctive concertina playing, as well as songs including the Brian McNeill-penned Scots social anthem “No Gods and Precious Few Heroes”. Robin's unique take on this song is a fan favourite at live shows and its appearance on this album is eagerly awaited.

On Sunday January 29th, Robin and Ailbhe are proud to launch “The Magpie's Nest” with a special early-evening performance upstairs at the Stag's Head, Dame Court, Dublin at 7pm. All are welcome and the session thereafter will no doubt assume legendary proportions!

“The Magpie's Nest” is now available for download from iTunes and can be streamed on all the major portals. It will also be available on the night and at live performances over the coming months.

Recorded and mixed at Audioland Studios, Co.Kildare by Anthony Gibney