Sarah Copus was just 10 years old when she performed solo for the first time, singing and playing harp. Now after hundreds of performances, at the age of 13, Sarah is releasing a solo album of her favourite music called Moorland Winds.  When asked about the tracks she chose for the album, Sarah said: “Some of these pieces are simply classics. Some are very old, perhaps even ancient. I love performing them so much that I wanted to make sure they would be around for a long time to come.”

Sarah is an award-winning and Billboard charting singer/songwriter who lives in the Dallas/Ft Worth area. She has been performing and recording for over 7 years with her parent's platinum selling progressive new age band, 2002, and more recently as a solo artist. As an artist under the age of 18, she has had some extraordinary success: two albums hit the Billboard Charts that feature her as lead singer, radio airplay across hundreds of stations worldwide, and a Best Vocal Album award from the Zone Music Reporter Awards Show in 2015. Her most recent recording was with 2002 on Celtic Fairy Lullaby which we launched on Tradconnect in March 2016.

This is a track from Moorland Winds called 'Wind on the Moor', an ancient folk song from the Hebrides played on Celtic harp and sung in both English and Scottish Gaelic.

Sarah has been a student of the North Texas School of Irish Music for over 5 years and during that time has learned a lot, explored Irish and Scottish music  and has travelled to Ireland as part of the school’s annual student exchange programme. North Texas School is very active when it comes to traditional music and has played a big part in Sarah’s early musical life. Combining this experience with her recording and performance work with 2002 has been a life-changing adventure. 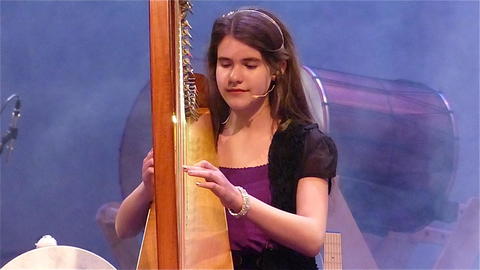 In a recent discussion with Sarah’s mother Pamela Copus, she explained the background to this solo recording: “The reason for Moorland Winds, is that Sarah (being a harpist) gets lots of requests to perform, not just at weddings, but senior centers, libraries, restaurants, and of course, any Celtic-type festival or pub. She did 160 performances during the 2014 - 2016 period, not just solo harp, but with quite a few other bands. She was getting constant requests for a CD featuring the exact music from the performances. So she gathered up the set lists, picked out her favourites and invited some of the other musicians she had performed with to create the product that was in so much demand.”

“On a personal note, as parents, it’s a time-capsule for us. So was Celtic Fairy Lullaby.  When we recorded Celtic Fairy Lullaby, Sarah had been singing in a Gaelic youth chorus for years. We knew those days would eventually end and we very much wanted to capture those songs. But it became more than just a memento for us of that magic time in Sarah’s life. It became a rather nice album and has been well-received.”

"Moorland Winds is a new time capsule.  Sarah has grown immensely as a vocalist, musician and arranger. She has some serious skills in the recording studio. Her voice has matured. You know, most parents make 'scrapbooks' with all the photos and bits and pieces of memories and important events in their children’s lives. I guess we make albums instead. You know Sarah was only 5 years old when she recorded backing vocals on Yeshua. That song eventually wound up on our album Believe. As the years have passed, her contributions have grown considerably.  The future of 2002 is very bright. We are all so excited with all of the things we can do now as 3 people. (Plus we are super-excited to have a violin/fiddle in the band!).”

Moorland Winds is now on release and can be purchased from iTunes and from www.sarahcopus.com.