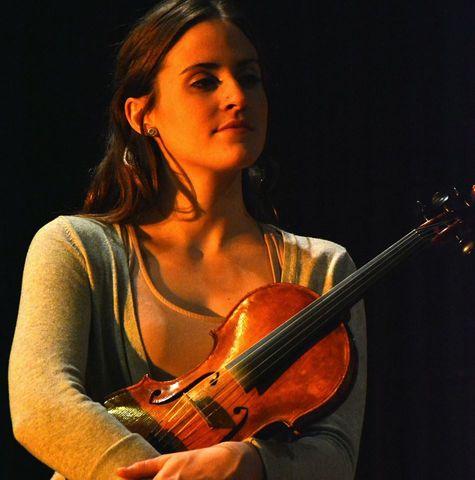 On her new album, Woven, she darts back and forth like the shuttle in a loom, pulling the many strands of the Scottish fiddle tradition into a colorful tapestry that showcases her virtuosic control of her instrument as much as her deep sense of playfulness.

Produced by acclaimed harpist Maeve Gilchrist, Woven comes from the deep community of talented roots musicians based around the Berklee College of Music in Boston, MA. To help her create this work, she’s brought together some of the best young traditional artists in her hometown of Boston, one of today’s hotbeds for new traditional music.

The lineup here includes cutting-edge Scottish harpist Mairi Chaimbeul, renowned bluegrass guitarist Courtney Hartman (Della Mae), New England Celtic guitarist Owen Marshall, plus three all-star guest fiddlers: Duncan Wickel, Darol Anger, and Alex Hargreaves. It’s easy to tell that the music on her new album stems from what must have been many late-night jam sessions with these friends, but the ease of companionship found on this album belies the complexity of Moynihan’s arrangements.

As the harp rolls in counterpoint behind the racing fiddle lines, or as the guitar matches her beat for beat, this is music whose virtuosity lies in Moynihan’s construction of the atmosphere around each tune and her delivery of each beautiful melody. Source : Hearth Music