Second Day of Recording for 'Our Dear Dark Mountain' 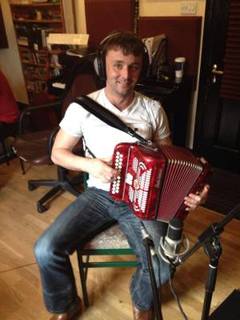 A second day of recording was undertaken for the 'Our Dear Dark Mountain with the Sky Over It' CD project over the past weekend.

Once again featuring the incredible musical talents of 2013 TG4 Young Musician of the Year, Dónal McCague, Saturday's session also featured the wonderful playing of accordionist Darren Breslin. As well as being a superb musician, Darren, as I'm sure anybody who knows him will attest, is one of life's gentleman. In the pursuit of this project, I spent a great evening with Darren and his family, in particular his grand-father Brian, discussing the history of music in the extended Sliabh Beagh area, and picking Brian's memory of the musicians of his younger days.

One man in particular stood out in his memory, fiddler Owen Connolly (1880-1951). Indeed, Brian remembered spending evenings alongside uilleann piper Seán McAloon in Connolly's house listening to these two great musicians play and discuss music. From Cornacreeve in the heart of the Sliabh Beagh region, Owen Connolly was during his lifetime a figure of immense importance to the musical traditions of the Sliabh Beagh region. Although now largely forgotten, he was according to reports an exceptional musician, performing regularly on national radio during the 1930s. Connolly was also in possession of a "a wonderful store of old tunes ... some of them handed down from one generation of [Sliabh Beagh] fiddler to another". In turn, Connolly passed many of these on to his pupils, chief among whom was Francie 'Paddley' McKenna (1898-1975) from Knockatallon, Co. Monaghan. The existence of this repertoire was such that it was stated that McKenna's house was 'a must for collectors of Irish traditional music'.

It was our privilege to be recording some of this music for the very first time last weekend.