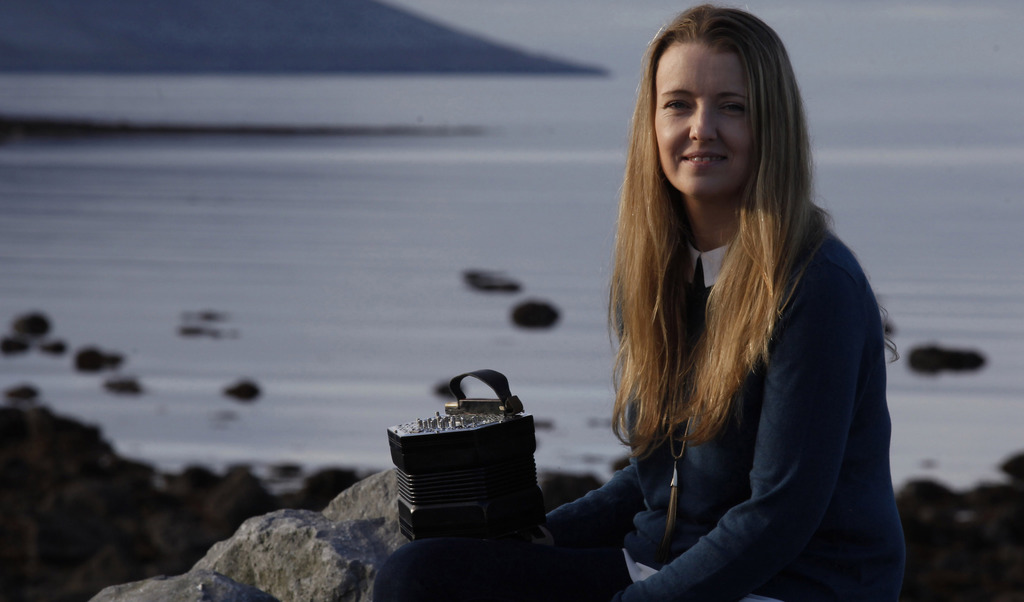 “Tunes from The Flaggy Shore” is the debut recording by concertina player Florence Fahy. Born and bred in the small village of New Quay in Co. Clare, only a short drive from Bellharbour and home to the famous concertina player, Chris Droney, she has been playing the concertina since the age of 10. Her father, (Martin Fahy or Mairtín as he is widely known as) was likewise a wonderful concertina player and provided the inspiration that allowed Florence to flourish and grow as a musician herself.

In describing the album she says that it is a “collection of some of her favorite tunes, learned from her dad and from musicians all over, who have influenced her down through the years.” The title for the album came after much thought on what best represents her and the music that surrounded her and influenced her growing up. “Some of my best childhood memories are of the Flaggy Shore, a small, rocky beach we considered heaven as children. It is now one of the most beautiful areas of the northern peninsula of Co. Clare with spectacular views across to Galway Bay and beyond.”

“It was inevitable that I started playing the concertina” she says. “I hail from a county steeped in the history of concertina playing and a house that was always full of music, be it on the old LP record player, a tape, the radio (wireless) or on television. In the wintertime, my father would play by the fire, learning new tunes by ear from listening to the music on old LP’s on the record player or the radio in the kitchen. Some of the first records I heard spinning on the record player at home where of the Old Kilfenora Céilí Band, the Tulla Céilí Band, Jack and Charlie Coen, Paddy Carty and The Shaskeen and we had a collection of old records that included some compilations of the great players like Sonny Murray, Solus Lillis and Paddy Murphy. Every Saturday morning, I would listen to whatever took my fancy in the sitting room and play my favourite tracks over and over again.

This is the opening track from the album featuring the tunes The Trip to Birmingham, The Fair Haired Boy and The Fox on the Prowl.

In the liner notes she says that the first tune in this set is one of her favourites and a composition of the great Josie McDermott, a flute and whistle player from Co. Roscommon. “I acquired this tune from a recording of The Tain Ceílí Band who hail from Dundalk in Co. Louth. The second tune I associate with the playing of Micho Russell. His music is something magical to me and tugs at the heart-strings every time I hear him sing or play. I played this tune with Charlie Piggott and Charlie recorded it on “The Lonely Stranded Band” album, with Miriam Collins in 1996. It is a beautiful album. The third tune is a composition of the great Vincent Broderick from Loughrea, Co. Galway. He is by far one of my favourite composers. I play this tune with my dad and it was a regular at our local session in Linnane’s bar in New Quay on Friday night’s years ago. On the album Florence plays a 30 button C/G Wheatstone that she got from her dad. He went to London many years ago and bought it for 20 pounds that he earned playing an interval set at the famous Galtymore dance hall in Cricklewood, North London. “It is really a great story” she says. “It is a beautiful instrument and I can’t imagine finding another that would quite match the tone, the sweetness and the personality of this one. It is a treasure indeed.”

Florence now lives in Boston and is a concertina teacher for the Reynolds-Hanafin-Cooley Comhaltas branch and she continues to teach and play at many great music festivals and workshops around North America. The greatest part about the Irish music community is the people you meet, she says. “I really enjoy meeting people and sharing my tunes and learning new tunes. I have come to realize over the years something my dad once told me. He said that ‘when you have the music you are never without friends or a place to go’.With that, I have a great family of friends within the music community in which there is a common bond no matter where I go in the world.  I am so thankful and grateful for that.”

What I am most proud of is that this album promotes the beautiful traditional North Clare style of concertina playing that is so indigenous to this region of the country. I celebrate this musical project with most importantly my dad and my mother, my husband and daughter, my siblings and many of my close musical friends who join me on this album.

Tunes from the Flaggy Shore is now on release and can be purchased from her website www.concertinachick.com or from CDBaby.com

The album is also available as a free download for radio broadcasters that are members of our Download Centre here on Tradconnect. Contact us for details.